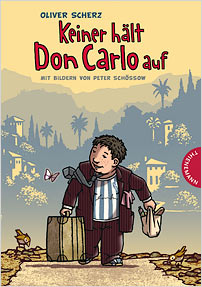 This little gem of a book is full of humour and suspense, and readers will love its sweetly courageous hero, Carlo.

Eleven-year-old Carlo lives with his mother in Germany but is determined to travel to Palermo to see his father again. Carlo misses his father dearly and longs to bring him home. He sets off on his travels without telling his mother and boards the train without a ticket, pretending to the amused conductor that a dog in his compartment has eaten it. Carlo encounters a wide cast of people on his way to Sicily, including an Italian taxi driver who drives off with his suitcase and money, leaving him stranded on a country road; a picture-perfect Italian family who give him a lift and feed him; and a kitchen boy on the ferry who is helpful at first and then a menace.

Carlo eventually reaches Palermo and is reunited with his endearing but unreliable father. The last chapter takes place six months later when Carlo is back at home in Germany and so is his father. He does not live with Carlo and his mother, but they spend time together as a family again and the future seems hopeful.

Oliver Scherz was born in 1974 and works as an actor and director. He writes children’s books and strives for his stories to have an impact on children and adults alike. He lives in Berlin with his wife and children.

Thienemann-Esslinger Verlag was formed in 2014 when two of the oldest and most renowned children’s book publishers in Germany joined forces, combining the imprints Thienemann, Esslinger, Planet Girl and Gabriel.