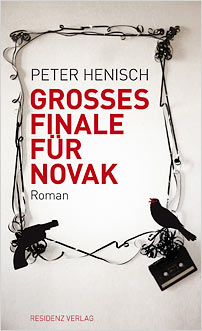 A man in late middle age who has been browbeaten over the years by his wife has an epiphany and kills her so he can listen to La Traviata in peace. With Henisch’s deft handling, the plot itself is like an opera, gradually increasing in intensity before culminating in the kind of tragedy that is more common on the stage than in real life.

While in hospital, Novak is given opera music to listen to by an Indonesian nurse, Manuela. He has never listened to opera before, but gradually becomes smitten with both the music and the nurse. On leaving hospital, Novak loses his job and struggles with the sudden loss of structure in his life. His wife, Herta, notices a change in her husband and is enraged by his new love. She travels to the hospital where Manuela works and complains that she ‘befriended’ her husband.

Novak and Herta finally separate. He attends a live opera and believes he sees Manuela in the audience. At the end of the performance, he approaches the woman he believes is Manuela, but she does not recognise him. Bitterly disappointed, Novak goes into a kind of catatonic state. Herta takes him back home with her, and he resigns himself to his lot. But when he learns how his wife caused Manuela to lose her job, Novak is incensed and refuses to accompany her on a trip abroad. On the day she leaves, Novak settles down to listen to La Traviata through speakers rather than headphones for the first time ever. However, Herta’s flight does not leave, and she returns home to find him. She pulls the stereo plug out of the wall just as he is listening to a duet he loves, and he shoots her with a gun he keeps in case of burglars. The book ends with Novak climbing up to a watchtower in the forest with the gun and his CDs.

Henisch depicts scenes of modern-day small town life in the West with sympathy and humour. His characters and themes will appeal to a wide readership – downtrodden husband who suppresses his emotions, if he is aware of them at all, for decades; overbearing, malicious wife; small-town racism and unquestioning acceptance of changes brought about by modernity; love and the meaning of life. Witty, ironic, sad, pertinent.

Peter Henisch was born in Vienna in 1943. At university he studied German, philosophy, history and psychology and later co-founded the left-wing literary magazine Wespennest. Since 1971 he has been living and writing in Vienna. He has received numerous prizes for his works, and his 2005 and 2007 novels Die schwangere Madonna and Eine sehr kleine Frau were longlisted for the German Book Prize.