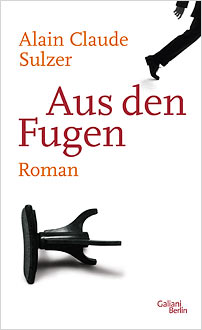 Alain Claude Sulzer is an experienced author who delivers a typically assured performance with his latest novel. Building up a cast of strong characters, he weaves their stories into an intricate pattern of quiet desperation, loneliness and the search for a better life.

Off Key tracks the implications of a very public incident for the private lives of its numerous characters. In the middle of a breathtaking recital of Beethoven’s Hammerklavier Sonata in Berlin, star pianist Marek Olsberg stops playing, closes the lid, and leaves the hall. ‘And that was that,’ says Olsberg. This scene forms the heart of the novel. The first half of the narrative focuses on the preparations for the evening by the pianist and certain members of the audience, while the second half is concerned with the aftermath of the concert’s sudden ending.

Immediately after Olsberg’s departure from the concert hall there is an atmosphere of confusion and concern. Once the audience disperses, however, we begin to see how the interruption to the concert triggers developments in the lives of many other characters. There is Lorenz, the waiter employed to serve at the party after the concert; Nico, who had high hopes of meeting Olsberg in person, but instead goes to the cinema alone, following a quarrel in a taxi with his boyfriend who turns out to be a former lover of Olsberg; Johannes, who passes on the concert in order to spend a relaxing evening with an escort girl whom he initially fails to recognise as one of his friend’s daughters; and Esther, who returns home early from the concert expecting to surprise her husband, but instead ends up being surprised herself by messages from another woman on her absent husband’s phone. Sulzer weaves these stories around the central incident of the curtailed concert. Olsberg himself discovers a new sense of freedom as a result of his life’s ‘off key’ turn. He happens to meet Nico when they each visit a Berlin bar alone. Olsberg tells Nico how he interrupted his own concert, plays Chopin on the piano in the bar for him, closes the lid and embraces Nico …

The dramatic moves, discoveries and revelations of the characters in Sulzer’s well-crafted novel provide rich entertainment. His principal achievement is to orchestrate a symphony of narrative voices into a gentle work of fiction in which, as its dust jacket aptly suggests, ‘sudden silence is louder than the beat of a drum.’

Alain Claude Sulzer was born in 1953 and lives in Basel and Alsace, where he works as a freelance writer. He has published numerous novels, most recently Zur falschen Zeit (2010). His books have been translated into English, French, Russian and Spanish, among many other languages. In 2008, his novel Ein perfekter Kellner (A Perfect Waiter) beat Ian McEwan, Richard Ford, Don DeLillo, Denis Johnson and others for the Prix Médicis étranger in France, where it became a bestseller. His latest honour was the Hermann Hesse Prize, which he was awarded in 2009.