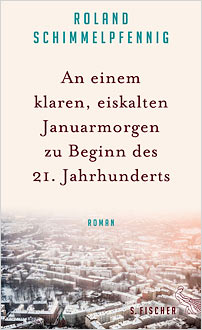 Celebrated playwright Roland Schimmelpfennig makes his first venture into the novel form with a compelling and beautiful narrative that readers will be reluctant to put down.

Cold is an omnipresent theme in this exquisitely-titled novel, which opens at the scene of a crash on an autobahn leading to Berlin. A petrol tanker lorry has overturned, been rammed into and exploded, sending flames into the dark and freezing night, and causing hours of traffic jams. It is there that the first sighting of the wolf occurs. Wolves haven’t been seen in the area for over a hundred years and when a young Polish construction worker captures an image of the animal on camera, the imagination of the press and of Berlin’s residents is caught. Especially when further sightings and tracks show the wolf is making for the city. The wolf becomes the connecting element between the characters of the novel as their lives intersect and diverge again. Schimmelpfennig probes the dramas of everyday life, both great and small, and their potential for pain. He explores the tension between his characters’ drive to follow their personal desires and their concomitant need for a fellow human’s warmth, with the cold and the wolf as powerful leitmotifs.

Schimmelpfennig is one of the most performed playwrights currently working in the German language and his work has been staged widely internationally, including in the UK. The striking visual impact of his novel reflects his talent for stagecraft. Much of the novel’s action occurs in the former East Berlin neighbourhood of Prenzlauer Berg, and in Schimmelpfennig’s skilful handling, that area of the city becomes an atmospheric film set. The montage effect of the narrative also resembles that of a black and white film, with moments of blazing light – the traffic accident flames, the burning embers of paper, the flash of a photograph, moonlight. The overall effect is evocative, visually arresting and extremely convincing.

On a Cold, Clear January Morning in the Early 21st Century may be a short novel, but its high-quality prose packs a substantial punch. English-language readers will appreciate the novel’s direct and unfussy style. A fairy-tale bristling with urban truths, this is a great read, best devoured in one sitting!

Roland Schimmelpfennig was born in 1967. He is Germany’s most frequently performed contemporary playwright. He has been a journalist in Istanbul and, after studying directing at the Otto Falckenberg Schule, worked at the Munich Kammerspiele. Since 1996, he has been working as a freelance author. His plays have been performed in over forty countries to date, with momentous success. Fischer Taschenbuch Verlag has published Die Frau von früher and Trilogie der Tiere.

S. Fischer Verlag was founded by Samuel Fischer in Berlin in 1886. He was the first to publish many now famous authors such as Franz Kafka, Arthur Schnitzler, Hugo von Hoffmannsthal and Thomas Mann. Both S. Fischer Verlag and Fischer Taschenbuch Verlag focus on literature, psychology and history.