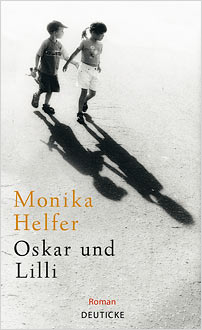 Oskar and Lilli is a book about children, told with the simplicity of a children’s book; but it is not a book for children. Told from the point of view of Oskar (seven) and Lilli (nine), Helfer’s novel poignantly addresses the uglier aspects of the adult world to which brother and sister are exposed without either explanation or protection.

The day the children wake up to find their mother asleep on the kitchen table with a strange man (they have never known their father), Lilli persuades Oskar to leave home with her. Social services arrange foster homes. Lilli is sent to the dull but nice Rut; Oskar ends up in a vegetarian, anti-television, energy-saving household consisting of two teachers, a baby and a grandmother, Erika. Bored by the teachers and their baby, Oskar spends more and more time with Erika; he helps her as she grows steadily more ill (she has Parkinson’s), and when she dies, she leaves him all her money. When a second baby is on the way, Oskar is sent to a new foster home, a guesthouse called the Dove, where he is looked after by the landlady, the waitress, Puppa, and the lorry driver, Bruno. Lilli, meanwhile, finds it hard to settle down in school, and takes refuge in a kind of friendship with Betti, the fattest girl in her class, and Betti’s heroinaddict sister. Towards the end, Oskar and Lilli go together to visit their mother, who is now in psychiatric care. Later Rut confides in Oskar’s ex-foster-mother that she is getting married and can no longer cope with Lilli. Brother and sister leave the party and set off into the night with Bruno in his lorry. The novel had begun with the children’s faces lit up by a policeman’s torch; it ends with their faces lit up by the moon.

Throughout Oskar and Lilli, fairytale-like elements coexist with the unattractive and often grotesque details of everyday life. Helfer pictures events through the children’s innocent eyes; the discrepancy between what they see and what the reader knows makes for a certain humour, but also serves to heighten the sordid details. This is a subtle, understated book written in simple, short sentences – cleverly crafted and well-written. The references to fairy-tale motifs scattered throughout the novel show that Helfer knows exactly what she is doing, and the near timelessness of the subject matter makes it suitable for readers anywhere.

Monika Helfer was born in 1947 in Vorarlberg, Austria, where she still works and lives with her family. She has written novels, short stories and children’s books. Her many awards include the Robert Musil Grant (1996) and the Austrian Prize for Literature (1997).