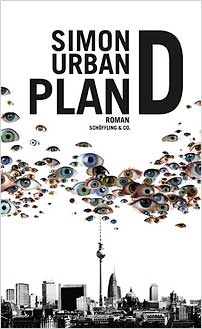 A modern-day Raymond Chandler, Urban’s remarkable genre-busting detective novel is set in Berlin in October 2011 – but with a difference. In Plan D, the East German republic still exists.

Martin Wegener is a GDR detective investigating the death of a man found hanging from a gas pipeline in the forest. All the initial clues point to the Stasi, less powerful than before the ‘Revitalisation’ in the early 1990s. With important economic consultations between East and West coming up, a West German police officer is called in to assist after the news is leaked to a magazine. The two men start their investigations, more hindered than helped by the Stasi, uncovering a terrorist organisation and a conspiracy to introduce a ‘third way’ in the GDR – the Plan D of the title.

Meanwhile, Wegener yearns for his ex-girlfriend, now embarking on a career in East Berlin, and has imaginary conversations with his former boss, a stubborn non-conformist who disappeared without trace a few years ago. The plot twists and turns beautifully, with more deaths and plenty of tension between the East and West German detectives.

In one brilliantly written scene, Wegener stumbles around the labyrinthine underground ‘Molotov’ bar, looking for his workmates but growing increasingly confused and emotional. The place is a den of iniquity that serves rhubarb organic lemonade – the flavour that’s always sold out at the shops – with a shot of vodka, and scallops and chestnut puree and bacon and chutney and the best brand of East German wine, and offers darkrooms and boudoirs and bathtubs and willing waitresses, all in the name of a corrupt socialism on its last legs.

The whole novel is beautifully and imaginatively written. The protagonist Wegener is an impressively painted character, an aging cynic on the surface who is actually powered by love and idealism. But what makes the book so very special is the exuberantly portrayed vision of East Berlin under a collapsing socialist system – pockets of luxury for visitors and functionaries, surrounded by grime and decay and decorated with laughable political slogans. Urban raises questions about German history and about the integrity of our political systems, combining them with a real page-turner of a plot.

Simon Urban was born in Hagen, West Germany, in 1975. After studying German literature in Münster and training at the renowned copywriter school Texterschmiede Hamburg, he studied creative writing at Germany’s top address, the Deutsches Literaturinstitut Leipzig. His short stories have earned him numerous prizes. Simon Urban lives in Hamburg and Techau (East Holstein). He currently works as a copywriter for the leading creative agency Jung von Matt.