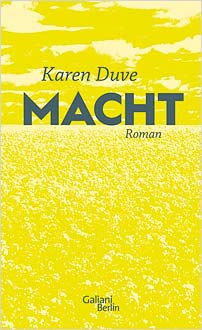 I first met Karen Duve (born in Hamburg in 1961) at the Goethe- Institut in Chicago; she was reading some of her short stories, and had already written her first novel, Regenroman (1999). I remember that it shocked the NBG reader writing a report on it for us with its murder of a gangster by flame-thrower, but the guest publisher from Bloomsbury on the editorial committee liked the sound of it, and I translated it (as Rain in English). Bloomsbury also published her next, This is Not A Love Song, which was longlisted for the Independent Foreign Fiction Prize. Rain won the Schlegel-Tieck prize, and the passage that I read from it on that occasion had the audience in fits of laughter. Duve’s trademark style is seriously funny in both senses of the term – to my mind, the best sort of comedy.

She is back on blackly humorous form in her dystopian new novel. In the interim she has published her modern take on the Brothers Grimm (Grrrimm), and a non-fiction book, Anständig essen, about her experiments with ethical diets ranging from organic to fruitarian. She has shared a platform on that subject with the like-minded Jonathan Safran Foer.

Her new novel is set in 2031, and the ‘power’ of the title, politically speaking, has been taken over by women. The creepy narrator, Sebastian Bürger, thinks that this idea turns the world upside down, and has imprisoned his wife Christine, previously the Environment Minister, in the cellar of their house near Hamburg. Despite Christine’s spirited attempts to escape, Sebastian keeps her baking cookies and agreeing (apparently) to his every word, in what I discover is called a prepper room, a refuge kept ready by followers of assorted Doomsday cults in case of disaster.

And there is plenty of disaster around, as a result of global warming, which by 2031 has passed the point of no return; a tsunami in a Tyrolean reservoir sweeps a tourist bus off the dam, hurricanes rage, spring is like midsummer, and genetically modified rapeseed flowers profusely four times a year. Not only the Hungarians but also the Indians and French have built walls to repel refugees, who are now drowning in the English Channel. People keep artificially young by taking a drug called ephebo – it carries a high risk of cancer, but if climate change is about to bring the world to an end, Sebastian thinks he might as well enjoy near-eternal youth, while farming out his children to his mother-in-law and keeping his wife in the cellar for sexual purposes.

But he has an Achilles heel: he has always nurtured a passion for a former schoolmate, Elli Westphal, and at a class reunion they get together. She fancies him too – but she also begins taking an interest in his family, and finds Christine. Now what? Sebastian has both a captive wife and a captive lover on his hands, very likely conspiring against him, and decides to get away to Paraguay. He leaves both women in the cellar, Christine chained to the kitchen unit, Elli locked up in the wet-room, but at least has the decency, or enough of an instinct for self-preservation, to write a letter saying where they are. He plans for it to arrive when he is safely airborne. But he is delayed on the way to the airport by rioting gangs: MASCULO, sharers of his own belief in natural male superiority; and the Disciples of John (of the Book of Revelation; Sebastian’s brother is a Disciple), queuing up to placate the Deity by sacrificing lambs. Sebastian gets hit over the head, fudges the delivery of his letter by handing it to a supposed friend to post, and as his plane takes off, the passengers are told that they’ll be stopping off in Paris to have the air-conditioning checked. He realises that he’s about to be picked up by the police, because his Ego-Smart phone shows the latest news: the former Minister, Christine, has reappeared, giving his game away. And what, he wonders, has become of Elli?

Duve’s dystopia is entertainingly inventive, but the real fun of the novel is in watching the insufferably self-satisfied Sebastian being too clever by half. He is a man who truly believes that the masculine mind is always, of its very nature, superior to any female equivalent. Having fixed himself up with Elli, Sebastian finds that all is not plain sailing, and like many another womaniser he gets caught in a tangled web of his own weaving. Mozart and Da Ponte knew what they were doing when they made Don Giovanni go right through the opera without ever having sex with anyone.

My first reaction to the date, 2031, was: isn’t that a little too soon? I thought that like George Orwell reversing the date of 1948 when he was writing 1984 to provide the title, maybe Duve had started writing in 2013, and switched the last two digits of the year. Then I looked at the TV pictures of the Cumbrian floods, and severe weather in the States and Australia, while primroses were merrily flowering in my garden in early January, and I wasn’t so sure. The book is an amusing warning against ignoring climate change, and also against its narrator’s lack of ethical standards, and is all the more effective for not preaching to its readers. Duve leaves her story to deliver its own message.

Karen Duve was born in Hamburg in 1961 and lives in the Märkische Schweiz Nature Park in Brandenburg. She has won many awards for her books. Her novels Regenroman (1999) and Dies ist kein Liebeslied (2005), Die entführte Prinzessin (2005) and Taxi (2008), were bestsellers and have been translated into fourteen languages. 2011 saw the publication of her experimental book, Anständig essen (‘Eating Well’), in which she asks ‘How much can I allow myself at the expense of others?’, setting off a wide-ranging discussion of our behaviour as consumers. Most recently, her polemic Warum die Sache schiefgeht (2014) was published. The film version of her novel Taxi was distributed in cinemas in 2015.