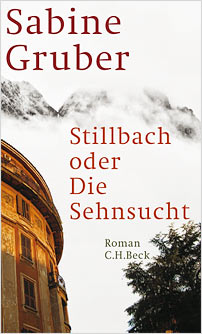 While memory and coming to terms with the past make up the powerful themes running through this fascinating novel, Gruber provides a remarkable insight not only into little-known episodes of twentieth-century history but also into the business of historiography itself.

The core of the book comprises the interlinked stories of two women, both German-speaking Italians from the fictional South Tyrolese village of Stillbach. Emma and Ines come to work in Rome at different times and end up spending their entire lives there. Alternating with an account from the 1970s told by Ines is the story of Emma, who arrived in the capital via Venice in the late 1930s, driven from her northern homeland by economic hardship. Emma remains in Rome throughout the Nazi occupation and its immediate aftermath, becomes pregnant, marries the father and eventually inherits the family business. Her fiancé, a Stillbach boy drafted into the SS, had been a victim of a partisan bomb. Vivid and painful memories of that loss well up in Emma, as well as nostalgia for her native Bozen.

The novel has a framework narrative, set in 2009, in which the manuscript that Ines had been working on comes to light. It is found by Ines’ childhood friend Clara, who travels to Rome after Ines’ death to sort out her affairs. Clara meets up with Paul Vogel, a historian of fascism and the German occupation who had a one-night stand with Ines and saw her again shortly before she died. Clara seems less upset at her friend’s passing than at Ines making no mention of her in her writing and for skewing certain facts. But Ines’ story resulted from reading eyewitness accounts of the Nazi occupation that she happened upon in a scholarly journal, and from conversations with Emma, her former employer. The intimate personal details of Emma’s life that it contains speak of a rapprochement between the two women: genuine working through the past, it seems, does not reside in ostentatious public acts of contrition but rather is teased out in small shared acts of remembrance and reconciliation.

The structure of Stillbach is a model of literary craftsmanship, dovetailing perfectly with its central themes, and the very way in which the core stories are conveyed reveals oral history to be a process every bit as painstaking as archaeology. A stunning achievement.

Sabine Gruber was born in 1963 in Merano, Italy. She studied German literature, history and political science at the universities of Innsbruck and Vienna. From 1988-1992 she was a lecturer at the University of Venice. Sabine Gruber lives in Vienna and has received several awards including the City of Vienna Support Award, the Austrian State Support Award and the Elias Canetti Scholarship of the City of Vienna.