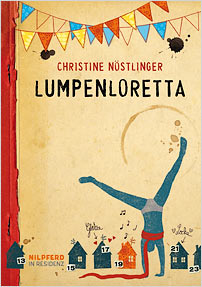 Rags-Loretta is a truly endearing novel about friendship and first love. A novel for teenagers fourteen plus, it paints a vivid picture of suburban childhood days, parents who are stuck in their ways, common preconceptions, and first rebellious dissociations from the parental home.

The arrival of an unconventional hippie family causes turmoil in a quiet middle-class neighbourhood. It especially affects Konrad, a boy who lives next door with his overprotective mother and his father. Konrad, or ‘Baldy’ as he is known, ever since he had to shave his hair because of lice, falls in love with Loretta, the new girl next-door. As the narrator tells us, ‘When you fall in love like Baldy, it is a matter of fate, and there’s nothing you can do about it.’ Loretta is everything that Baldy is not: loud, self-confident, outspoken. She wants to be a circus performer. She is protective of her neglectful parents and her baby brother. Baldy cannot but seek out Loretta’s company, against his mother’s will; she is appalled at the new neighbours’ nonchalant, disorderly and noisy lifestyle.

Nöstlinger’s novel is full of delightful moments. In order to think things through properly, Baldy resorts to his ‘thinking rock’ for hours on end, and his introspection always leads to an action of one kind or another. He is surprised by his sudden affection for someone who could not be more different from himself and from his world, and yet he is prepared to embrace this novel feeling and defend it against his mother’s protest. Another character, who has always loved Baldy and is now saddened by his infatuation with the new girl, describes her dilemma:

‘So you’ve loved someone as long as you can remember, and he falls in love at first sight with someone else, and you’re supposed to give him this new girl’s number – just to stop him acting like such a zombie. That’s a bit much to ask of anyone.

Baldy is heartbroken when social services take Loretta away because her parents leave her alone at home for a few days. He finds out where she is staying and goes on his first ever train journey by himself to rescue her. Loretta has settled happily with foster parents in another village, and Baldy returns without her; but he has a long-term plan: he starts to train to be a circus clown … This touching novel explores universal themes that will speak to young people everywhere.

Christine Nöstlinger was born in 1936 in Vienna, and now lives as a freelance author in both Vienna and Lower Austria’s Waldviertel. She writes for newspapers, radio and TV. Her children’s and young adult books are known well beyond the Austrian borders. She was awarded the Andersen Award and the Astrid Lindgren Prize and her A Dog’s Life, translated by Anthea Bell, won the inaugural Marsh Award for Children’s Literature in Translation in 1996.