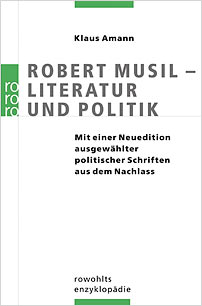 Robert Musil’s status as a major European writer is well established: endorsements by the likes of Milan Kundera and J.M. Coetzee, two English translations of Der Mann ohne Eigenschaften (The Man Without Qualities), as well as of his short fiction, his play Die Schwärmer, the best-known of his essays and speeches and a substantial selection from his notes and diaries. What is new in Klaus Amann’s book is a coherent presentation of a group of texts that remained unpublished in his subject’s lifetime and the analysis he provides of Musil’s situation and activities in the years between the publication of the first two volumes of Der Mann ohne Eigenschaften in 1930-32 and his death in 1942.

The main focus of the book is on Musil’s responses to political developments following the consolidation of the National Socialist regime in Germany in 1933. Having lived in Berlin since November 1931, he had first-hand experience of the impact of National Socialism, and when he returned to Vienna in May 1933 he was also manifestly appalled by the reactionary developments that were taking place in Austria. But he faced particular difficulties when trying to issue a clear public declaration of his own position in response. Amann’s analysis points to the on-going financial hardship he suffered, to the pressure his publisher (Rowohlt) brought to bear upon him to dissociate himself from open opposition to National Socialism in its early stages, but also to problems with particular publishing outlets and to bureaucratic machinations in Austria.

Most clearly brought out are Musil’s abhorrence for the attempts of politicians and movements, whatever their ideological orientation, to treat literary writing as an instrument of their political goals, and his perception of the need for the writer to maintain intellectual independence. Also striking is the parallel he drew between the mass euphoria attending the outbreak of war in 1914 and the mood of 1933. It is in this context that the continuity in Musil’s thinking about the underlying unity of human nature and its capacity for extremes of behaviour becomes apparent.

Amann’s book has rightly been received in Germany as an important contribution to Musil scholarship. It deserves the same welcome here.

Klaus Amann is Professor of History and the Theory of Literary Life and Director of the Robert Musil Institute for Literary Research at the University of Klagenfurt, Austria. He has written widely on Austrian writers from Adalbert Stifter to Peter Handke, Robert Musil to Christine Lavant, Franz Grillparzer to Thomas Bernhard and sits on the jury of several notable literary prizes.

Robert Musil (1880–1942) is arguably best remembered for his modernist masterpiece The Man Without Qualities. Other works included the novella Die Verwirrungen des Zöglings Törless (The Confusions of Young Törless) and the short stories Drei Frauen (published with two other stories in English in a volume called Five Women). A beautiful edition of his diaries was published in English in 1998 by Basic Books. Also available in English are a collection of his essays entitled Precision and Souland another entitled Posthumous Papers of a Living Author.