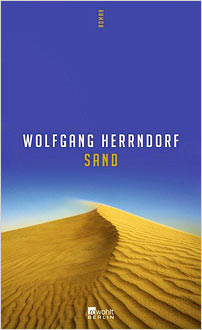 Sand is an intriguing thriller from a master storyteller with a growing English-language readership.

At the same time as the Palestinian terrorist attacks during the 1972 Munich Olympics, a local man from a North African desert town is accused of breaking into an oasis commune composed largely of hedonistic Western European ex-patriots, and murdering four people. The crime has witnesses but is investigated by two bungling policemen who are tired of their monotonous roles and make only a limited effort. In the meantime, we meet a man who is ostensibly suffering from amnesia. He becomes Herrndorf’s hero in Sand, as he lurches from one mishap to the next, incurring injury (both emotional and physical) at every turn in a spate of torture and threats that he cannot comprehend. Though the overarching cause of his pain, and the innumerable groups on his tracks, remain ambiguous, the reader finds truth in his hapless scrapes and existential contemplation.

Herrndorf paints a vivid picture of a post-colonial society, highlighting the endemic corruption of the police, social prejudice and the decadence of an unfettered artistic class. At the same time he breaks new ground with this expansive, multifarious and scurrilous novel.

Wolfgang Herrndorf was born in Hamburg in 1965. He studied art, contributed drawings to several publications, and began to write relatively late in his career. He lives in Berlin. He was declared to be the ‘Doyen of Pop Literature’ and awarded numerous prizes for his previous novel, Tschick. Sand was nominated for the Leipzig Book Fair Prize 2012.

Translation rights sold to:
France (Thierry Magnier), Brazil (Tordesilhas). Rights to his previous title TSCHICK have been sold to 17 countries including the USA.