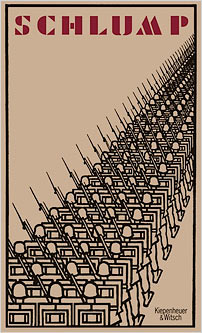 Schlump reads like a modern version of the German literary classic, Jakob Christoffel von Grimmelshausen‘s Simplicissimus, in which the horrors of the Thirty Years War have been replaced by those of World War I, with a new picaresque adventurer to initiate readers into the particular brutalities – and manifold amorous opportunities – of early twentieth-century warfare.

Hans Herbert Grimm’s eponymous anti-hero is a consummate rogue: christened Emil Schulz, he earns his nickname during a boyhood prank in the marketplace of his home town. The name sticks and he is never far from trouble thereafter. Schlump is sixteen-years-old at the outbreak of World War I and eager to enlist in the army and be part of the action. The novel charts the misfortunes, opportunist escapades and farcical romantic entanglements which characterise Schlump’s army career, presenting a thoroughly unidealised view of a soldier’s life during World War I. Schlump’s humorous resilience and boundless optimism do not detract from Grimm‘s unflinching portrayal of the appalling inhumanity of trench warfare.

The first few days of Schlump’s army life after being posted to France are defined by dismal conditions which are a far cry from the heroic deeds and swaggering glamour of the young soldier’s imagination. Typically, Schlump manages to fall on his feet and is given an administrative posting overseeing the affairs of three French villages on the basis of his – considerably exaggerated – linguistic abilities. Schlump quickly becomes so immersed in village life that he forgets he is a soldier. The villagers solicit his advice in resolving all manner of difficulties: he settles disputes between neighbours, as well as helping a distraught mother whose child’s head has become stuck in a chamber pot. His good deeds are interspersed with passionate encounters with various adoring girls from the village.

The next chapter in Schlump’s army life takes him into active combat. The continual drills and harsh life of the infantry soldiers feel alien to Schlump after his recent experience of civilian comforts. Yet the exhausting night marches, the terrifying first encounters with shrapnel fire and the misery of being tasked with digging fortifications in the frozen ground are merely a foretaste of the horrors awaiting Schlump and his fellow soldiers once they reach the trenches on the front line. The relentless discomforts of living in a muddy ditch – the lice, the rats, the ubiquitous filth and the inadequate rations – are enumerated alongside more profound concerns such as the unbearably cold winter conditions, the havoc wreaked by attacks from enemy propeller mines and the constant fear of death. Schlump’s departure from the front line is occasioned by an injury sustained in characteristically comic fashion: when a mine strikes the latrine where he is sitting to relieve himself.

Schlump’s incorrigible good humour, along with a hefty dose of old-fashioned good luck, saves him from the worst ravages of wartime, even though he is posted back to the trenches for a second time. Schlump reflects on the humiliation of trench warfare: there is no glory here, and any heroic way of conceptualising warfare is rendered meaningless in the context of the living nightmare of the trenches. Schlump is the only member of his company who survives. After a long convalescence, Schlump lives out the remainder of the war working in the German military’s currency exchange. His amorous encounters with a long succession of women continue apace, culminating finally in a touching reunion with his childhood sweetheart.

A distinctive pleasure of this novel lies in its many narrative excursions, as diverse characters share their own stories with Schlump – of lost love, betrayal and military hardship – which are held up as warnings of the worst that this hellish war has to offer. Grimm’s major achievement is his ability to balance such unsentimental accounts of people’s wartime sufferings alongside the unfailing delight of Schlump’s gauche charm.

Schlump was originally published in Germany in 1928, the same year as Erich Maria Remarque’s renowned anti-war novel, Im Westen nichts Neues (All Quiet on the Western Front). The public clearly had a keen appetite for literature with a satirical take on the horrors of total warfare, and an English translation of Schlump by Maurice Samuel was published in the UK and the US in 1929, entitled Schlump – The Story of an Unknown Soldier. Kiepenheuer & Witsch are bringing out a new edition of Schlump in 2014 to mark the centenary of World War I. The English-language rights have recently been acquired by Vintage Classics in the UK and New York Review Books in the USA. The new translation will be a valuable means of introducing Hans Herbert Grimm’s neglected masterpiece – whose brisk prose still has a fresh, modern feel in the original German – to a new generation of twenty-first century English-language readers and is scheduled for release in May 2015.

Hans Herbert Grimm (1896-1950) was a pacifist school teacher who taught French, Italian and Spanish in the city of Altenburg, in Thuringia. Schlump was published in 1928 in Berlin under a pseudonym and the author remained anonymous even after the book was among the titles burned by the Nazis in 1933. Although Grimm’s wife was keen to emigrate, he refused, and joined the Nazi party to ensure that he would remain inconspicuous. After the outbreak of World War II Grimm was conscripted and worked as an interpreter on the western front. He was no longer permitted to work as a teacher after the war and took his own life in 1950. Grimm’s identity remained obscure until Volker Weidermann’s Das Buch der verbrannten Bücher (‘The Book of Burned Books’) was published in 2008.