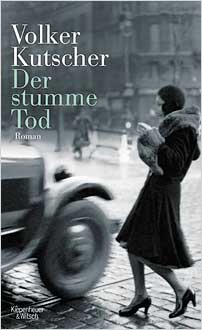 It is March 1930, and Inspector Gereon Rath, that tetchy but talented refugee from the Cologne police force whom nbg readers will remember having met before, is sent to investigate the death of actress Betty Winter at the La Belle Film studios in Berlin. Initially it appears to be an unfortunate accident – a heavy lighting unit fell on her during a shoot – but as Rath looks into the matter it seems that something more sinister may have occurred. Chief Inspector Böhm, ‘the Bulldog’, is set to take over the case, but Rath continues to investigate on his own.

This is the world of the first sound films, and a competitive time for rival directors Bellman from La Belle Film and Oppenberg from Montana Film. Each believes that the other is trying to sabotage his work, and it even transpires that the lighting assistant at La Belle Film used to work for Montana and applied for his new job using a false identity. Now he has disappeared, making him the main suspect. Then Oppenberg confides to Rath that his leading actress Vivian is missing and pressures him into investigating this case in his own time.

When Vivian’s body is discovered in a disused cinema with her vocal chords removed another murder case is opened and the press starts to talk of a serial killer, all the more so when the body of a third actress, Jeanette Fastré, is found in another disused cinema, with the same physical injuries as Vivian. These two cases are clearly linked, but nobody apart from Rath believes that there is a connection with the first one. He is right, of course, and after many further twists and turns brings the murderer to book, but not without landing himself in near-fatal danger beforehand.

Though the manner of the first actress’s death may put old-timers in mind of the theatre-based thrillers of the late Dame Ngaio Marsh, Kutscher’s tale is very much of its place and date (even former Chancellor Conrad Adenauer, in his earlier days, comes in as a minor character – he is said to be being blackmailed). And what an alluring setting this proves in such skilled hands. Inspector Rath has what it takes to become an established figure on these shores, too.

Volker Kutscher was born in 1962. After studying German literature, philosophy, and history, he worked as a journalist before writing his first detective novel. Today he lives and works as a freelance author in Cologne. Der nasse Fisch (2007), the first novel in his Detective Rath series set in 1930s Berlin, was an immediate hit. Der stumme Tod is his fifth novel, and the second in this series.