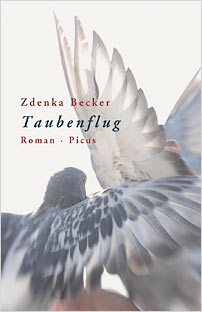 This novel traces the love between Silvia Goralová and her childhood sweetheart Daniel Polák, separated in 1968 at the time of the Soviet invasion of Czechoslovakia and finally brought together again following the deaths of their mothers, almost forty years later. The story is set against a changing political backdrop, with characters and locations responding to the occupation and, in 1989, to the Velvet Revolution and the financial ‘trappings’ of the West. A dark element of child abuse within the Catholic Church provides the reason for Daniel’s disappearance and, later, for the death of his brother Gregor and the murder of the village priest, Father Matúš. The story unfolds as Silvia discovers letters from Daniel, written following his disappearance and hidden from her by her mother Klára, as a result of a thirty-year feud with Daniel’s mother Tereza.

Racing, or carrier, pigeons are a leitmotif: they bring characters together and their fundamental instinct to overcome all odds return to their mate, provides the basis for the love that is finally shared by Daniel and Columbina – the name he gives Silvia.

The author’s personal experiences lend authenticity to the events of those times of transition, in all their shades from Soviet grey to the bright and gaudy moments that follow.

Zdenka Becker was born in the Czech Republic and grew up in Bratislava. She studied at the School of Economics in Bratislava and at the Viennese Institute of Interpreting. It was in 1986 that she began to write in the German language and she has published both poetry and prose, some of which has been prize-winning. Her work has been published in Hindi and Punjabi, as well as in some Eastern European languages.