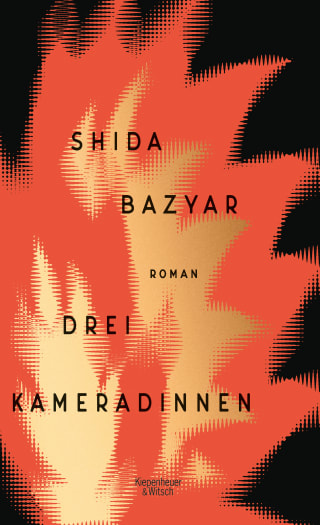 This timely novel follows the deep and unwavering bond between three women as they confront systemic racism, white and male privilege, and the resurgence of the far-right in Germany. Shida Bazyar is a talented author whose writing will appeal to fans of Elena Ferrante, Zadie Smith and Kamila Shamsie.

Sisters in Arms opens with a tabloid-style newspaper article accusing a young, allegedly radicalised Muslim woman, Saya M., of starting a fire in a building which left many dead. The novel’s narrator, Kasih, then explains what really happened. Kasih and her two best friends, Saya and Hani, have known each other since childhood, growing up together on a housing estate. Now young adults, they are trying to navigate a world that seems to be stacked against them. Saya is always angry and is particularly incensed by the rise of the far-right in Germany. Hani has a steady job as a secretary but is overworked and underpaid. Kasih, meanwhile, has just emerged from a difficult break-up and is struggling to find a rewarding job.

Although they now live in different places, the trio’s shared sense of sisterhood remains strong and is an anchor in their turbulent lives. Despite their outward stoicism the friends are increasingly affected by the discrimination and barrage of racist micro-aggressions they face in their daily lives. Saya channels her distress at these experiences into an obsession with neo-Nazi groups, watching documentaries about them and closely following a trial exposing one particular far-right group. Kasih worries about Saya’s erratic and obsessive behaviour. Retelling the story, she tries to track Saya’s actions leading up to the fateful night of the fire, looking for clues that might explain what happened.

The devastating fire breaks out in a block of flats, killing many people, including numerous immigrants. We are at first led to believe that Saya is blamed for the fire and is imprisoned. However, in an unexpected twist, Kasih reveals that she has made up a lot of the story, to demonstrate how society reacts to people from ethnic minority backgrounds when they commit crimes, compared with the crimes committed by the racist far-right. Saya is not actually guilty of any crime, she is simply someone who stands up for what she believes in. The story ends with the news that the trial of the neo-Nazi group has just begun but leaves open the question of whether justice will be served.

Sisters in Arms is an immersive and thought-provoking read with a strong plot and relatable characters, and which explores urgent contemporary questions around racism and sexism in society.

You can read translator Ruth Martin’s interview with the Shida Bazyar here.

Shida Bazyar, born in 1988, studied literary writing in Hildesheim, and, in addition to writing, worked in youth education for many years. Her debut novel, Nachts ist es leise in Teheran, came out in 2016, won the Blogger Literary Award, the Ulla Hahn Prize, and the Uwe Johnson Prize among others, and has been translated into Dutch, Farsi, French and Turkish.