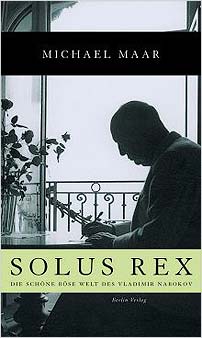 There are literary critics whose output, however slight, demands attention. Michael Maar is one such. His fame was established when, in 2005, he published The Two Lolitas. This expanded thesis, which he developed from an original essay, made the controversial yet plausible claim that Vladimir Nabokov may have suffered from ‘cryptoamnesia’ when writing Lolita. In 1916 a short story with the same title appeared by an author called Heinz von Eschwege writing under the pseudonym Heinz von Lichberg. Did Nabokov know of the tale? Maar assesses the striking similarities between both the stories and the authors. His arguments are skilfully put, his evidence cleverly constructed. Yet some may feel that the verdict is still open, that the case he makes is still greater than the sum of its parts.

Be that as it may, having tackled the two Lolitas, Maar has now moved on to make Nabokov himself the subject of his investigations. Although essentially a monograph – the book runs to 192 pages, fifty of which constitute the endnotes and bibliography – Solus Rex is a welcome addition to the ever-growing critical canon on the Russian genius. This is not least the case in Germany itself, where biographical and critical works on Nabokov have been thin on the ground.

Maar is a master literary sleuth: he discovers hitherto hidden sources and quotations as well as informative references. He is at his best when uncovering those small, seemingly irrelevant details which demonstrate how closely aligned the life was to the work. Moreover he shows how one of the greatest writers of the twentieth century was able to depict both the beauty and the inscrutability of the world, as if it were ruled by a malign force rather than a benign god. Among the gems is the story of how, in spite of having lived in Berlin for fifteen years, Nabokov liked to put about the highly questionable claim that he never mastered the German language. He also liked to compare the Germans to hyenas who should be chloroformed.

Maar is a clear and engaging writer and this scholarly book is a fascinating page-turner. If it does no more than bring the reader back to the original texts themselves, it will have amply fulfilled its brief.

Michael Maar born in 1960, has taught at Stanford University and is a member of the illustrious German Academy for Language and Literature, founded in 1949 in the Paulskirche, Frankfurt am Main, on Goethe’s 200th birthday. Highly regarded as a critic and essayist, and the German expert on Vladimir Nabokov, this awardwinning writer now lives in Berlin.

Berlin Verlag was founded in 1995 as an independent publishing house. It publishes literary fiction and quality non-fiction for a wide audience and a select range of international authors. Berlin Verlag is also known for its work in developing promising young German writers, such as the acclaimed Ingo Schulze, Elke Schmitter, Irina Liebmann, Marcus Braun and Gila Lustiger as well as publishing the plays of Elfriede Jelinek, Nobel prize-winner in 2004. Since 2003, Berlin Verlag has belonged to the Bloomsbury Publishing group. After the successful launch of the children’s books list, Bloomsbury Kinder- & Jugendbücher, in 2003, a new imprint, Bloomsbury Berlin (headed by the Number One Spiegel bestseller, Schott’s Original Miscellany) marks its second phase of new developments.