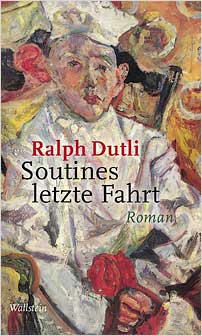 Soutine’s Last Journey is a powerful textual montage which documents the French painter’s journey back to Paris in August 1943. Ralph Dutli’s biographical novel is both an informative account of Soutine’s life and a bold essay illuminating his art.

Chaim Soutine’s situation in Nazi-occupied France was as difficult as can be imagined. Blacklisted both for being Jewish and a ‘degenerate artist’, he and his companion Marie-Bethe Aurenche spent a long time on the run in provincial France. Having been in hiding from the Gestapo in a safe place outside Paris, Soutine is forced to return to the city to seek emergency surgery for a stomach ulcer. To avoid being caught Soutine is transported to the French capital in a hearse. The journey along the back roads on 6 August 1943 takes twenty-four hours during which Soutine is dosed up with morphine to ease his pain. The operation is unsuccessful and Soutine dies on 9 August and is buried in Montparnasse Cemetery two days later.

Dutli’s magnificent novel positions Soutine’s fever-induced hallucinations in the hearse on the way to Paris alongside documentary material and more conventional narrative sequences. The different kinds of text overlap and sometimes merge, allowing Dutli to present multiple perspectives on episodes in Soutine’s life and on the nature of his work. In this way, Soutine’s final journey to Paris is movingly contrasted with his first arrival in the art capital of the world, from his humble beginnings in a poverty-stricken shtetl near Minsk. Fragmentary sequences transport the reader from Soutine’s impoverished childhood (and its Jewish ban on images), to the crowded artists’ ateliers, to Soutine’s friendship with Modigliani, to his years of recognition. As well as the real characters from Soutine’s life and career, there are also intriguing hallucinatory figures, such as the mysterious doctors in a pristine white hospital who promise to cure him not only of the ulcer but also of painting itself.

Ralph Dutli transports his readers into the heart of Soutine’s visual world, animating his portraits of bell-boys and bakers’ assistants and vividly describing the colours Soutine smears across his surfaces – the reds of every shade which disturb and disrupt his canvases. This novel achieves the rare feat of bringing visual art to life on the page in its brilliant depiction of Soutine’s uncompromising quest to capture both the present and future of the subject portrayed on the canvas.

Ralph Dutli was born in 1954, lives in Heidelberg and works as a freelance writer, lyricist and translator; he studied French and Russian in Zurich and Paris. He is the editor of the ten-volume Osip Mandelstam Complete Edition. He has received well-known prizes and distinctions, the most recent of which was the Johann Heinrich Voss Prize awarded by the German Academy for Language and Literature. Ralph Dutli has published more than thirty books and editions to date, including the recent publications: Liebe Olive. Eine kleine Kulturgeschichte (2009) and Fatrasien. Absurde Poesie des Mittelalters (2010, 3rd edition).