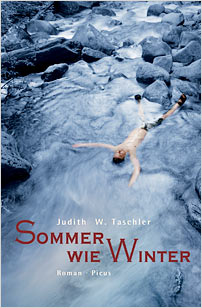 Burrowing beneath the surface of a familiar Alpine holiday destination, Summer and Winter is Taschler’s cleverly structured and highly marketable first novel.

The story is told in a series of transcripts of therapy sessions with various members of the Winter family and their foster son, nineteen-year-old Alex Summer. Alex is increasingly curious about his birth mother, who has never been traced. In a recurring nightmare, he sees a man in a long black coat strangling his mother and becomes convinced that she has been murdered. There is nothing he can do with this ‘evidence’, however, and it seems his search has come to an end. He also has no clue about his real father, who according to his foster mother was a businessman from Germany. Then, in a final visit to his first home, he finds a shredded photo of his sister Manu’s baptism. He confronts Anton, his foster father, with the photo and Anton admits to being his father – he promises to acknowledge Alex as his son and formally adopt him.

The dramatic conclusion comes when Alex notices the coat his father is wearing in the baptism photo, and his world suddenly collapses: it is the coat the man was wearing in his dream. Planning to flee, Anton stops to say goodbye to Manu, and Alex confronts him. They talk in the car, where Anton claims that he did not strangle Alex’s mother – she fell and hit her head and he brought her body back to bury it. Manu, hiding in the boot, hears his confession and, when the jeep plunges off the mountain road, she and her father pull the unconscious Alex from the wreckage and she allows Anton to escape. In a final twist, when the body is unearthed, it emerges that Alex’s mother was strangled, making his father a murderer.

For a short novel, Summer and Winter has an ambitious plot, but the action is carefully sieved through a fine narrative mesh: as a whole, it reads like a piece of very well-crafted literary fiction. The unusual structure provides multiple perspectives on the story, each character having their own distinctive but nuanced voice. The novel sets up a series of opposing forces: city and village; traditional and modern; the needs of the family and the needs of an individual. An assured and evocative debut.

Judith W. Taschler was born in 1970 in Linz. She has a degree in German Studies and History and works as teacher in Innsbruck. She has written several screenplays and Sommer wie Winter, her debut novel, was shortlisted for the 2011 Franz Tumler Literaturpreis. Taschler was invited to the 2011 Salon of Debutants at Harbourfront Literaturfestival and to the 2012 European Festival of the First Novel. She is currently working on her second novel.