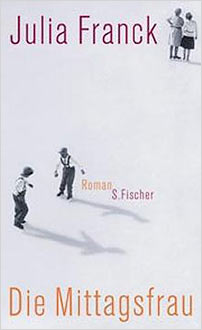 In 1945, at the end of the Second World War, Helene abandons her seven-year-old son Peter at a train station in Vorpommern in the far north-east of Germany. Mittagsfrau is the story of her life up to the moment of that abandonment, set against historical events and the shattering impact of two worldwide cataclysms.

It is a tale of much suffering. Her Jewish mother has never recovered from the death of a baby son and rejects Helene, who is mainly brought up by her sister Martha, nine years her senior, and when their father goes off to fight in the First World War his wife begins a descent into madness from which she will never recover. Martha’s training as a nurse is put to good use when the two girls have to tend their stricken father on his deathbed, but unfortunately she also takes the morphine intended for her patient and becomes a long-term addict, besides losing her lover. Helene’s relationship to her sister is passionate and sorrowful, and at times their relationship tips over into the incestuous, such is the intensity of Martha’s loneliness.

Later the two girls manage to escape the family confines and go to Berlin to lodge with their aunt Fanny, who is wealthy as well as socially and sexually liberal – a complete change of lifestyle. But life gets no happier when Helene’s young lover mysteriously dies, and in the world at large there loom Hitler’s rise to power and the approaching Second World War. Helene meets Wilhelm, a Nazi sympathiser, and reluctantly agrees to marry him. Their union is not happy but at least, thanks to him, she obtains false papers, escaping the consequences of her Jewish identity with a new name. Peter is born but the horrific experiences, including rape, which Helene undergoes at the end of the war cause her to take the decision to abandon him in the hope that he will fare better without her. Ten years later she comes to see him but he hides until he hears her drive away.

This is a profound though melancholy story, brilliantly brought alive, which captures the pathos and paradoxes of its principal character with sympathy and understanding against the sombre background of her time.

Julia Franck was born in 1970 in East Berlin and moved to West Berlin in 1978. She spent her childhood and youth in Schleswig-Holstein, returning to Berlin in 1983 to study philosophy, German, and American Studies. Her work has won various prizes, including the prestigious bi-annual Marie Luise Kasnitz Prize in 2004. She spent 2005 with one of the sought-after scholarships at the Villa Massimo in Rome.