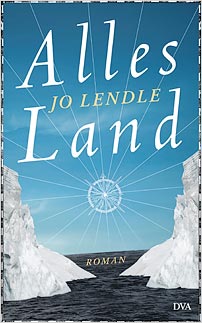 The All Land is a beautifully written, meticulously researched, and gripping fictionalised account of the life of polar explorer, Alfred Wegener, who died on expedition to Greenland in 1930 while attempting to prove that one can survive a winter in ‘the loneliest place on earth’.

In 1880, Alfred is born to a minister and his wife in Berlin, where they run an orphanage. He grows up to be smart, if a bit hot-headed and driven. After completing his meteorological studies, he seeks the meteorologist Köppen’s advice in Hamburg and takes off on his first solo expedition to Greenland. He barely survives the grim conditions. He returns to go to Marburg to study, and three years later, he also returns to see Köppen – and his daughter Else. They get engaged shortly after, but the wedding is postponed, as Alfred insists on going on another expedition to Greenland. Alfred returns eventually, and in 1913, he marries Else.

He is drafted when Else is nine months’ pregnant, and when he returns, his wife and baby are strangers to him, and the war has taken its toll. Alfred turns more and more to his studies. He presents his theory of the formation and drift of the continents, his idea of an ‘Ur-Continent’ that he calls ‘All Land’ – but he is laughed at by the whole scientific community (it will take thirty years after his death in 1930 until his theory is acknowledged). Eventually, as he approaches his fiftieth birthday, he decides to go on another expedition to Greenland, promising Else it will be his last.

Looking back on and summing up his life, he ultimately presents himself as the ambiguous character that he is. Trying so hard to be a family man, but ultimately failing, he not only devoted his life to science, but was also repeatedly drawn to the digressive paths and phenomena related to his fields of research. An eternal sceptic, he is doomed never to be truly happy with his life and accomplishments.

Lendle is a gifted writer, whose prose is rich in imagery, whose descriptions are tender and precise. From the beginning of this poetic novel, he slips into the boy Alfred’s mind and describes the world through his eyes, a world in which mundane things are fascinating, and in which one can lose oneself.

Jo Lendle was born in 1968. His first studies were in cultural pedagogy and animation culturelle, followed by time at the German Literature Institute in Leipzig. Lendle edited the literary magazine Edit and has been a visiting professor and lecturer at several universities. He was awarded the Leipzig Promotion Prize for Literature in 1997. Today he heads the DuMont publishing house.

Deutsche Verlags-Anstalt was founded in 1831 and has published works by many leading writers, scholars and architects, as well as politicians and journalists from Germany and Europe, either in book form or within the pages of one of its journals. The DVA books’ section alone feature works by twelve Nobel prizewinners, four German Federal Presidents and thirteen German Chancellors. Today DVA’s reputation for publishing quality literature is based on its editions of work by poets such as Paul Celan, Sarah Kirsch, Doris Runge, Ulla Hahn and C.W. Aigner; by novelists such as Joyce Carol Oates, Carlos Fuentes, Sibylle Lewitscharoff and Thomas Rosenboom; and of André Gide’s diaries and Marcel Reich-Ranicki’s essays.