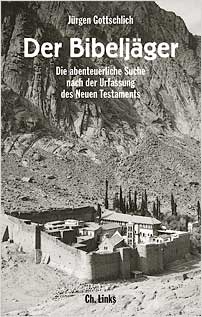 The Bible Hunter offers a fascinating account of the history of the Codex Sinaiticus, one of the oldest surviving bound books in the world and the oldest copy of the New Testament in existence. Gottschlich describes the manuscript’s long and complex history, from its origins in the fourth century CE, to its present home in the British Library where the complete text has been digitalised.

In 1844, palaeographer and academic Constantin von Tischendorf, driven by an obsession with the origins of the Bible, discovered the Codex Sinaiticus in the Greek Orthodox Monastery of Saint Catherine in the Sinai Desert. Of the 129 sheets of parchment which he correctly identified as belonging to a Greek Bible manuscript which pre-dated the Vatican’s, he managed to remove forty-three and published a transcription and commentary two years later. Unable to convince the monks to release any further sheets from the manuscript, Tischendorf eventually arranged to visit the monastery in 1859 under the patronage of Tsar Alexander II of Russia. In order to retain the Tsar’s protection of the monastery, the monks permitted the manuscript to be loaned and it was taken to St Petersburg. It remained there until 1933 when it was bought by the British Library for £100,000, which was raised by public subscription. It is alleged that Tischendorf may well have deceived the monks in his pursuit of the truth and preservation of the manuscript, and Gottschlich makes a convincing case for this interpretation of events.

The ten chapters of the book – part-travelogue, parthistorical study and critique – interweave several narrative strands: the author’s own visit to the Sinai; Tischendorf’s life and career; the history of the Bible and the Church; the history and life of the monks in the Monastery of St Catherine; the discovery of the Codex Sinaiticus and attempts to procure it; and the story of the manuscript to the present day. Gottschlich’s open-minded approach to the monks and their life and liturgy contrasts sharply with the colonialist and patronising tone used by Tischendorf.

This compelling study is the first of its kind to focus on the history of the Codex Sinaiticus, and is impressive in the breadth of its focus. It raises important questions about the nature of scholarship, and about the complex issue of how – and in particular where – the treasures of Antiquity are best preserved and displayed.

Jürgen Gottschlich was born in 1954. He studied philosophy and journalism in Berlin. In 1979 he co-founded the taz newspaper, where he worked as a journalist until 1993. He continued as deputy editorin- chief before moving on to become the editor-in-chief of the Wochenpost weekly in 1994. Since 1998 he has worked as a correspondent for a variety of newspapers in Istanbul.