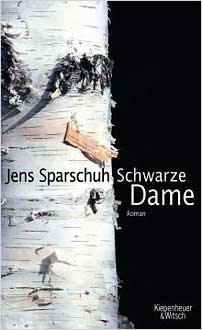 Alexander, the principal character in this novel, meets his new friend the property magnate Bertram Blosse at a reception at an academic foundation where Blosse is speaking on ‘Risk and Loss’. Soon afterwards they meet at Blosse’s new villa and play chess. At the end of their game, and before retiring to bed, Blosse sets Alexander the so-called Black Queen Problem to solve. The solution is provided in the third and final section of the book but before that all sorts of other things happen and – the novel’s unique plus – Sparschuh pulls off something really remarkable: he shows a university department in 1970s Leningrad – where Alexander, like the author himself, spent several years as a student – as an enclave of unbridled free thinking.

From Alexander’s quest for the elusive Russian Jelena to philosophical questions handled with sparkling clarity, this is a really strong and well-written book, both a literary novel and a humorous read. Like Ingo Schulze’s 33 Moments of Happiness, it represents on one level a German response to Russian culture – a fact which didn’t stop Schulze’s book being serialised on British radio. Well, here is another that should not be allowed to slip through.

Jens Sparschuh was born in 1955 in Karl-Marx-Stadt (now Chemnitz). Between 1973 and 1978 he studied philosophy and logistics in Leningrad, then continued his studies at the Humboldt University in Berlin and was actively involved in the Civil Rights Movement in the GDR. He has written novels, essays, radio plays and children’s books, and in 1988 was awarded the Anna Seghers Prize.