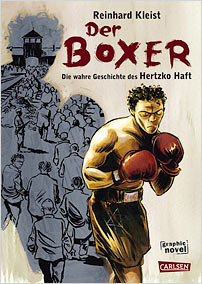 The Boxer is a graphic novel which tells the life story of Holocaust survivor Hertzko Haft. This latest novel confirms Reinhard Kleist’s position at the forefront of the new wave of German author-illustrators who are gathering an increasing international following.

The story starts with Hertzko’s teenage years in the Polish town of Belchatow, growing up with seven siblings. When the Nazis occupy the country in 1939, Hertzko is fourteen years old. He joins his brothers and friends in smuggling food across the border of the occupied zone, where his impressive physical strength soon becomes evident. He falls in love with Leah, a friend’s sister, and they decide to marry. But fate intervenes: Hertzko is captured by the Nazis and transported to a labour camp without being able to say goodbye. He passes through a series of camps, gradually realising the full horror of what happens there. The language is sparse, reflecting Hertzko’s near-illiteracy. Throughout the story the drawings give a sense of what happened whenever words fail, depicting Leah and Hertzko’s devotion to one another through silent scenes on a riverside, as well as corpses being loaded into incinerators.

Hertzko manages to survive through a combination of his resilience and ability to secure protection from Nazi officers, who spare him the worst tasks in exchange for favours such as collecting jewels from corpses. The thought of seeing Leah again gives him courage. One day his ‘protector’ suggests that he participate in a boxing match for the entertainment of the officers, and Hertzko proves to be a formidable fighter. He escapes from the camps during a death march and goes on to compete in more boxing matches after the war, always hoping to encounter Leah. Eventually he decides to try his luck in America where he fights the titans of the time, including the infamous Rocky Marciano. After his defeat against Marciano he opens a shop and settles down with the girl from across the road. Years later he tracks down Leah, only to discover that she is dying. Their reunion after decades in America is one of the book’s wordless scenes, with Leah and Hertzko walking in her garden, silently clutching each other’s hands.

Kleist’s most compelling graphic novel to date is not to be missed. It will inevitably draw comparisons with Art Spiegelman’s Maus, and forms an insightful and moving contribution to the literature of the Holocaust.

Reinhard Kleist was born in 1970 and studied Graphic Arts and Design. Since 1996 he has been living in Berlin, where he shares his studio with other comic book artists. His comic books have won several awards, including the most prestigious prize for German comic publications, the Max und Moritz award, for Cash.

Carlsen Verlag was founded in 1953 as a subsidiary of the Danish company Carlsen, Copenhagen, so that its series for younger children could be published in German translation. Carlsen Verlag Hamburg has been publishing its own titles since 1964, ranging from picture books for younger children to novels for young adults. Educational series include both fiction and non-fiction for kindergarten and primary school levels. Carlsen Comics were the first to introduce graphic novels to the German market.