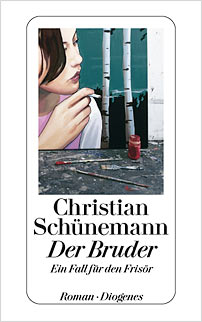 This novel is an unlikely beast indeed: a delicious crime thriller of sorts interspersed with hairdressing appointments and detailed descriptions of the cutting, styling and colouring of hair. The second in a series, its protagonist is the gay, Munich-based coiffeur to the rich and famous, Tomas Prinz. The time is the present, during and just after the Christmas and New Year holidays, and the action moves back and forth between Munich and other cities, from Moscow to Zurich to Nice. The cast of supporting characters is even more varied, with eccentric figures from the art world headed by down-at-heel painter Jakob Zimmermann who claims to be the hairdresser’s half-brother. But just as Prinz is beginning to believe this tale he discovers the artist dead in a flat that he was occupied in re-decorating. It is at this quite late stage that the police themselves get involved, resignedly accepting that their world and that of reluctant amateur sleuth Prinz are to cross again.

The book’s style is a mix of high whimsy and irony as light as whipped cream. It is frolicsome and fun but can also achieve darker and more serious tones, and sometimes genuine pathos. The first in the series was warmly praised by the literary editor of the Süddeutsche Zeitung, Ijoma Mangold, and this, the second, matches it in punch and charm. Tomas Prinz’s salon is an intriguing venue, and you’re certain to get a good cut there.

Christian Schünemann, born in 1968 in Bremen, studied Slavic philology in Berlin and Saint Petersburg, worked in Moscow and Bosnia-Herzegovina and gained a diploma from the Evangelist School of Journalism in Berlin. He received the Helmut Stegmann Prize in 2001 for an article published in the Süddeutsche Zeitung. In 2002 an excerpt from the novel Der Frisör (‘The Hairdresser’) was awarded a prize at the highly regarded young authors’ competition Open Mike. Christian Schünemann lives in Berlin.