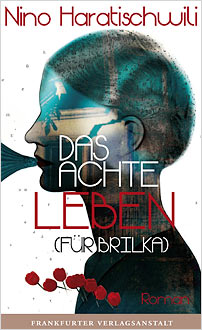 Nino Haratischwili’s latest book is a monumental family saga spanning six generations between 1900 and the present day, set in Georgia, Moscow, London and Berlin. It combines a Tolstoyesque epic narrative with lightness and humour as well as elements of magic realism.

The Eighth Life (for Brilka) recounts eight exceptional lives from one Georgian family. The story starts at the dawn of the twentieth century in a small town between Georgia and Azerbaijan, where a gifted chocolatier concocts a secret recipe for a delicious hot chocolate drink with dangerous powers. The hot chocolate proves to be a huge commercial success and the chocolatier soon prospers with his own factory. His four daughters are brought up in high society. Stasia, the eldest, dreams of a life in Paris and a career as a ballerina, but at seventeen she marries a soldier of the White Guard who is transferred to Moscow on the eve of the October Revolution, far away from his wife. When Stalin becomes the sole leader of the Soviet Union, Stasia and her children seek shelter in the house of her youngest sister, Christine, in Tbilisi. While the socialist upper classes enjoy the good life, the country’s impoverished population suffers at the mercy of aggressive reforms. And when Stalin’s right-hand man begins to take notice of Christine’s striking beauty and unworldly manner, disastrous consequences ensue.

Niza, the novel’s brilliant narrator, is Stasia’s greatgranddaughter. Born in 1973 in Tbilisi and now living in Berlin, she is a fascinating character who achieves an epic voice without affectation, recounting her family’s dramatic history and reflecting with wit and irony on successive events. The sweeping narrative covers a crucial century of European history, illuminating Georgia’s position at the geographical and political crossroads of Europe as it charts the Soviet Union’s rise and fall, the collapse of the Iron Curtain and perestroika.

Haratischwili’s large cast of characters are well-drawn and credible, with their own distinctive passions, foibles and contradictions. Their fates are skilfully interwoven and vividly described and none of them leaves the reader untouched. With this richly imagined masterpiece full of passion, love and drama, Nino Haratischwili has proved herself as one of the most interesting and original writers of her generation.

Nino Haratischwili was born in Georgia in 1983, and is an award-winning novelist, playwright, and director. At home in two different worlds, each with their own language, she has been writing in both German and Georgian since the age of twelve. In 2010, her debut novel Juja was nominated for the German Book Prize. The following year, Mein sanfter Zwilling won the Independent Publishers’ Hotlist Prize. It has been sold to Italy, France, Poland, and Greece.

Frankfurter Verlagsanstalt, headed by Joachim Unseld, publishes the latest contemporary literary voices. Their programme has successfully provided an important forum for significant new discoveries since they were established in 1994. Outstanding contemporary writers, such as Bodo Kirchhoff and Nino Haratischwili, Ulla Lenze, Zoë Jenny, Claire Beyer and Helmut Kuhn, have all been published by the Frankfurter Verlagsanstalt.