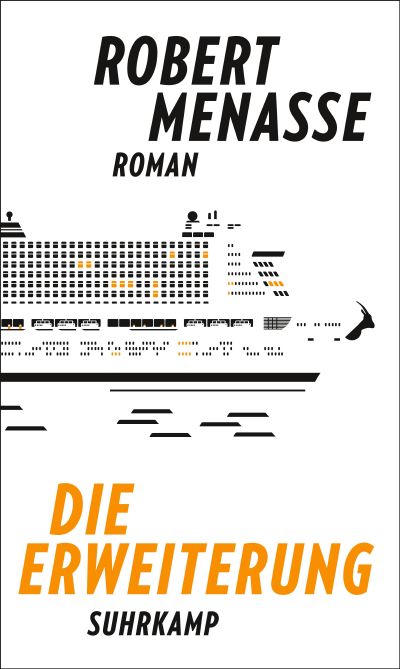 Robert Menasse’s latest novel is a post-Brexit tour de force, wrestling with difficult issues in European identity and politics, including the fundamental question of, ‘what is Europe?’ Die Erweiterung is the sequel to Die Hauptstadt, winner of the 2017 German Book Prize and translated into English by Jamie Bulloch as The Capital (Maclehose Press, 2019). Readers do not need to have read Menasse’s previous work to appreciate this gripping, witty, and thoroughly entertaining book.

Menasse’s protagonists are sharply drawn: the triumphs and disappointments of their personal and professional lives delineated with a convincing accuracy that speaks to the author’s expert knowledge of the European political scene. Adam and Mateusz were best friends as children growing up in Poland. Their families’ lives had been interconnected for generations, and the boys swore an oath upon entering the underground Communist resistance movement together that made them ‘blood brothers’. Adam is now a senior official in the European Commission and Mateusz is the prime minister of Poland. While the two men’s fates are still inextricably bound, they have come to despise one another, with Adam increasingly appalled by the ruthless expediency and anti-Semitism displayed by Mateusz in his rise to power.

When Adam is required to coordinate the preparations for a Western Balkans conference in the Polish city of Poznań, he inevitably crosses paths with Mateusz, who will be hosting the conference. In a private meeting between the two men, Mateusz reveals his hard-line opposition to EU expansion to a horrified Adam, along with the political posturing he engages in to maintain the appearance of a more welcoming Polish attitude towards the Balkan states. Adam’s career hangs in the balance after his candid report of this meeting is mistakenly circulated around the department.

Meanwhile, the novel follows the strategy being masterminded in Tirana to maximise Albania’s chances of securing entry to the EU, by defining Albanian identity in the broadest terms possible and encompassing Albanians who reside outside the country’s geographical borders. A cunning political advisor to the Albanian president hones in upon the historical figure of Skanderberg – a fifteenth-century feudal lord and military leader – as a crucial symbol of Albanian national unity. Skanderberg’s battle helmet is on display in a museum in Vienna, but the president seeks to have it retuned to Albania with a view to crowning himself with this symbolic headgear and thereby claiming the right to represent the disparate Albanian population throughout the EU.

Die Erweiterung is a magnificent achievement from one of Austria’s foremost literary talents: a unique and important contribution to contemporary literature. Menasse’s insightful portrayal of the state of play in twenty-first century EU politics is both a thought-provoking analysis of the ongoing challenges faced by the European project, as well as a lively and humorous take on the political dimensions of human lives.

Read more on the book at the publisher’s website here .

Robert Menasse was born in Vienna in 1954. He studied German philology, philosophy and political science in Vienna, Salzburg and Messina and received his PhD in 1980 with a thesis on the character of the outsider in literature. Menasse then spent six years at the University of São Paulo, first as a lecturer for Austrian literature, then as a guest lecturer at the Institute for Literary Theory, where he gave lectures on philosophical and aesthetic theories, including on Hegel, Lukács, Benjamin and Adorno. Since his return from Brazil in 1988, Robert Menasse has been a writer and essayist based mainly in Vienna.