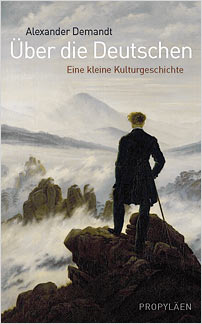 Here is a tour de force: some 700,000 years of the cultural history of the Germans fitted into 500-odd pages with conviction and enthusiasm – and, it seems, little or nothing left out. The chapters are organised thematically rather than chronologically under headings such as ‘Women and Love’, ‘Trees and the Forest’‚ ‘God and the World’ and so on. Kant’s critical imperative is put on an equal footing with garden gnomes and cock-crowing competitions and the great man himself makes an appearance not just as a philosopher but also in a section on dentistry as a German who believed in the tooth worm. Similarly, Goethe is quoted as an authority on the German beer belly, and figures in the chapter ‘Games, Sport and Holidays’ as an enthusiastic ice-skater. This is an erudite book to relish.

Demandt manages to avoid the greatest threat to a work of this nature and resists producing a collection of clichés and cultural stereotypes. He is not overly patriotic either, praising where praise is due (Dürer and Menzel, for example, or German classical music), but also sharply critical at times, also of contemporary aspects. Nor does the author view the history of German culture as being just about progress: while some areas develop for the bettter, others seem to decline. And vice versa.

Intelligent without being dry or overly academic, ‘Klein’ without being superficial, at once informative and entertaining, this is a most impressive achievement.

Alexander Demandt, born in 1937, was a Fellow in Ancient History and Cultural Studies at Berlin’s Free University from 1974 to 2005. He has published widely on the Roman Empire, the history of science, and cultural history.