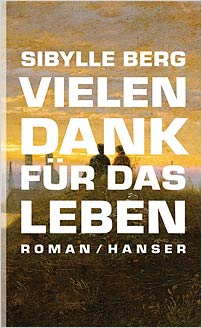 Sibylle Berg pours her boundless creativity into the protagonist of her latest novel, Toto, a fabulously inscrutable character who changes gender halfway through the book. Toto embodies aspects of the fairytale world of the brothers Grimm, along with roguish qualities drawn from the picaresque heroes of German literature. At the same time, The Gift of Life is in a class of its own and will make waves in the contemporary literary scene for its far-reaching, imaginative framework and its distinctive narrative perspective.

Toto is an enigma. Born in East Germany in 1966, with no obvious gender, the midwife decides to make Toto a boy. But his lack of a definite identity seems to bring out the worst in people: he is swiftly abandoned by his parents, then suffers neglect and abuse in a brutal children’s home before being sold to a pair of alcoholic farmers. Although his life seems unbearable, Toto is inviolate. When a chance encounter enables him to escape to the West, he observes the variously destructive effects of capitalism on everything from animals and the environment to business and family life. Neither communism nor capitalism appears to hold the answers as to how best to organise human society and neither political system is hospitable towards Toto, who remains the quintessential outsider.

When Toto discovers a talent for singing there seems to be a spark of hope in Berg’s arresting story, but his voice awakens so much pain in his listeners that people cannot bear to hear him. Toto is buffeted by the vagaries of modern life before eventually crossing paths with Kasimir, an investment banker who grew up in the same children’s home. By now, Toto is living as a woman and she and Kasimir find happiness together. They set off for Paris, where Kasimir ultimately abandons Toto and she is left homeless. Toto finally dies in the year 2030, when Berg envisions Europe as a wasteland, with Asian tourists gawping at the poor on the streets of Paris.

In a testament to the quality of her narrative, Berg’s novel has been described as a mixture of Michel Houellebecq and Elfriede Jelinek. Yet Berg’s voice and style are unique. An experienced writer who knows exactly what she wants to say and how she wants to say it, Berg’s clear, precise language is one of the many delights of this thoughtful and endlessly intriguing tour de force.

Sibylle Berg was born in Weimar and lives in Zurich. She writes novels, plays, essays and columns (for the Neue Zürcher Zeitung and Der Spiegel among others). In 2008 she was awarded the Wolfgang Koeppen Prize.