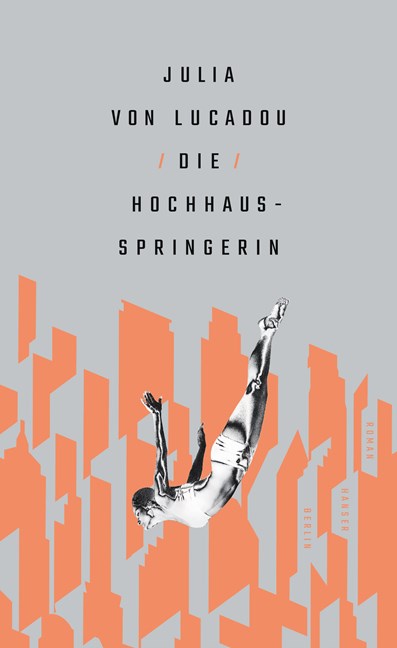 Julia von Lucadou’s excellent debut about the psychological effects of secret surveillance chimes with the increasing interest in dystopian fiction, in particular works written by women.

Riva Karnovsky is a disaffected ‘high-rise diver’, a top athlete and media star, who has broken her contract with her promoters and is refusing to train. Hitomi Yoshida is the psychologist who has been hired to spy on her in her flat and via her online interactions, and to come up with a way of reintegrating her. The novel follows Hitomi in her journey from loyal state worker into obsession, breakdown, and eventual ejection from the gated city to the dreaded ‘peripheries’.

Unable to find a way to reach Riva and reintegrate her into her training programme, Hitomi remains under pressure from the investors who have a stake in Riva’s continued stardom. High-rise divers are the products of a celebrity culture designed to keep the ‘peripheral’ citizens – those living in the poor suburbs – loyal to the ideals of the city. Children in the peripheries compete in castings for the option to move to the city to train as high-rise divers and become rich and famous. Disturbing details about the organisation of the futuristic society emerge over the course of the novel: most children do not grow up with their ‘bio-parents’ but are produced by breeders and raised in institutions in the peripheries, and most women undergo voluntary sterilisation on reaching sexual maturity. People in the city are constantly watched, tagged by facial-recognition software and monitored by hidden cameras wherever they go. Even their most encrypted digital interactions can be retrieved and analysed.

Hitomi’s strategies to gain leverage on Riva become increasingly radical and set in motion the steps that lead to Hitomi’s downward spiral into disobedience, breakdown, and dismissal. Riva, meanwhile, escapes the city to live anonymously in the peripheries. The shock effect of the novel is subtle and reminiscent of Kazuo Ishiguro’s Never Let Me Go: these dystopian worlds are essentially not so very different from our own, making the transgression of ethical boundaries in the novels all the more chilling.

The popularity of The Hunger Games series as well as the TV adaptations of Margaret Atwood’s The Handmaid’s Tale and Naomi Alderman’s The Power points to the current appeal of dystopian themes. The High-Rise Diver also has echoes of influential works such as Aldous Huxley’s Brave New World and Yevgeny Zamyatin’s We. It is a compelling, well-written novel that will appeal to a global audience.

Julia von Lucadou was born in 1982 in Heidelberg and has a PhD in film studies. She has worked as an assistant director, television editor and as a simulated patient; she lives between Biel, New York and Cologne. Die Hochhausspringerin is her debut novel.