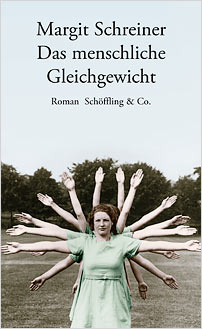 The Human Equation is an innovative and moving novel about the unreliability of memory and the limitations of subjective perception. The narrator – a highly respected author – is about to leave for a holiday on an isolated island off the coast of Croatia when Sarah appears at her door. Sarah is the daughter of an old friend and the narrator has not seen her for years. She has nowhere else to go and the narrator, knowing of the violent murder of Sarah’s parents in Jerusalem three years previously, the death of her halfbrother, and the recent suicide of her youngest brother in Israel, invites her along on the island holiday.

Over the course of the holiday, more is revealed about the tragic events surrounding Sarah’s life, and her presence prompts many of the other characters to reflect on their own lives. There are leisurely scenes of characters swimming, walking, eating, and playing cards. The island’s landscape is described in long passages of vivid and evocative prose. Interspersed between these scenes are nestled various conversations between the characters which take in a variety of serious, philosophical themes. There are also numerous exchanges between the narrator and Sarah which explore Sarah’s emotional struggle to survive what has happened.

Sarah departs suddenly the night after they return from the island, leaving her diary with the narrator. This is a diary which she began immediately after her parents’ murder and continued throughout her time at a psychiatric hospital. It closes with her finally piecing together an account of what happened to her parents and her half-brother, an event she has otherwise utterly suppressed and has no memory of. Through the diary we learn that Sarah consciously decides not to remember her parents’ murder, which, as it turns out, was committed by her troubled half-brother, who was killed by a policeman during the murder. Instead, she recreates a version of the crime from newspaper and police reports and claims it as her own. This, it becomes clear, is a method of survival. But it is also a comment on the potential unreliability and constructed nature of memory. Sarah’s passing-on of the diary is a conscious and symbolic act of letting go and moving on.

The Human Equation is an impressive novel whose themes are accessible and unequivocally compelling. Margit Schreiner’s perceptive writing is reminiscent of A.L. Kennedy and Sarah Hall and will strike a chord with English-language readers.

Margit Schreiner was born in 1953 in Linz, Austria, where she now lives again after many years in Tokyo, Paris, Rome and Berlin. She has won various scholarships and awards for her writing, most recently the Austrian State Prize for Literature.