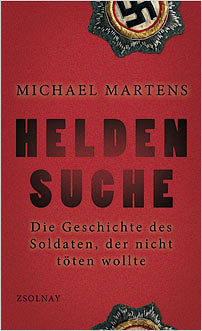 Conjuring up the peculiar atmosphere of contemporary Serbia in this multi-faceted and intriguing book, Martens invites the reader to become a kind of detective at the scene of a crime.

Josef Schulz was part of the German forces which occupied Yugoslavia in 1941 and one of the first casualties of partisan action that year. A day or so after his death, a number of young men were executed as a reprisal by German troops in the Serbian town of Smederevska Palanka. This shooting gave rise to the legend that one of the firing squad refused to take part, was immediately faced with the choice to kill or be killed, and chose the latter path. This noble action was attributed to Schulz, who became a cult figure in Yugoslavia more or less straight after the end of the war and equally, in the 1960s and 1970s, attracted the attention of the German press. The cult in Yugoslavia went so far as to spawn a film, various memorials (or at least the inclusion of Schulz’s name on partisan memorials) and, as late as 2009, a plan to name a major thoroughfare in the aforementioned town after the man.

Why should such a legend develop and survive for so long? On the German side, the post-war desire to find and put on a pedestal someone who had refused to go along with Nazi barbarism is easy to understand; in Yugoslavia, the identification of an enemy soldier with the national cause gave the state legitimacy. At the same time, Nazi war crimes investigators have been especially concerned to discover the truth, as the legend of Schulz seemed to support a fallacious argument invariably put forward by defendants in war crimes trials: that the alternative to obeying orders was death. Interestingly, a real event did perhaps help to give birth to the story: the execution of the partisan Ivan Muker, a German-speaking communist who had moved to Serbia in 1940, and who was therefore almost as much an outsider as Schulz.

The Hunt for a Hero has much of importance to say about the worlds of politics and the media, not to mention human gullibility. The case itself may relate to ‘a far-off country of which we know little’, but the themes, in particular the question of how legends and ‘folk tales’ arise, are of universal interest.

Michael Martens was born in Hamburg in 1973. From 2002 to 2009 he worked as a correspondent for the Frankfurter Allgemeine Zeitung in Belgrade. Since then he has reported for the paper from Istanbul.