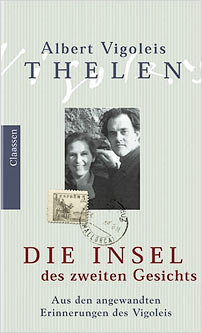 In 1953, an unknown German writer with a 1,000 page novel met with astonishment and success. Paul Celan hailed it as ‘a genuine work of art’, Siegfried Lenz wrote in Die Welt am Sonntag, ‘If any book deserves to be called an event, it is this’ and in 1999, Maarten t’Hart proclaimed in Die Zeit, ‘The greatest book of the century is Die Insel des zweiten Gesichts by Albert Vigoleis Thelen.’

Based on the author’s own experiences in the 1930s on the Spanish island of Majorca in the years just prior to the Spanish Civil War, this is an enormously engaging book. Robert Graves and the Counts Harry Kessler and Hermann Keyserling were among the island’s then residents, and all three get a look in. The tradition is picaresque, the style ironic, the detail often hilarious and the prose self-consciously elaborate. A memorable evocation of an enchanting haven before the age of mass tourism, it is also the portrait of a young, politically uncommitted German artist and intellectual in voluntary exile from the political turmoil of his homeland.

A connoisseur’s rather than a run-of-the-mill purchase in German bookshops, this novel has been carefully and lovingly translated into English by Donald O. White, Professor Emeritus at Amherst College in the USA, who worked with Thelen. A delightful ‘gem’ indeed.

Albert Vigoleis Thelen was born in 1903 in a small town near the Netherlands border. He studied history, linguistics, German literature and journalism in Münster and Cologne. In the late 1920s, disillusioned with political and social developments in Germany, he moved to Amsterdam where he began a career as a freelance writer, translator, and journalist. In 1931 he and his Swiss-born partner Beatrice took up residence on Majorca. After 1933 he wrote reviews under a pseudonym for the Dutch journal Het Vaderland of works published in exile by emigrants from Hitler’s Germany. At the outbreak of the Spanish Civil War in 1936, the couple made for Switzerland, having been labelled ‘politically suspect’ and placed on a list for possible arrest by the German consulate on Majorca. There followed years in Portugal where the Thelens stayed with novelist, poet, philosopher and theologian Teixeira de Pascoaes, whose major works Thelen translated into German. In 1953 Thelen read an episode from Die Insel des zweiten Gesichts at a meeting of the Gruppe 47 in Germany. It met with criticism from the group’s founder, Hans Werner Richter, but was published that same year to enthusiastic reviews and, upon adoption by the Bertelsmann Book Club, became a bestseller and in 1954 Thelen was awarded the coveted Fontane Prize. While he was not to achieve this level of success again, Thelen continued to write, translate and review in the subsequent decades, until his death in the German town of Dülken in 1989.

The complete work has appeared in French, Spanish, and Dutch translations