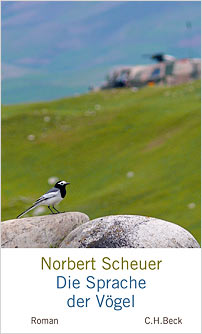 Norbert Scheuer’s elegant and atmospheric novel balances various intriguing plot strands. The book is punctuated by its protagonist’s lyrical musings on the appearance and behaviour of birds, accompanied by beautiful illustrations.

Paul Arimond is doing his army service as a paramedic in Afghanistan in 2003. He might well have opted for the civilian social service alternative, except that he was driving when he and his friend Jan were involved in a car crash, leaving Jan with permanent brain damage. So Paul chooses the army, partly to get away from his feelings of guilt, and partly influenced by his ancestor Ambrosius Arimond, a late-eighteenth-century traveller and ornithologist. Ambrosius developed the theory of the language of birds that gives the book its title.

Paul himself does a lot of bird-watching in Afghanistan. He shares his quarters with two likeable army comrades and is also friends with an Afghan man, Nassim. Meanwhile he sometimes hears from his girlfriend Theresa, working on a stud farm at home, where she and a friend start to vie for the attentions of the attractive new vet. Paul longs to get down to the shores of the lake visible from the lookout tower in camp. He keeps a diary, illustrating it with the exquisite drawings of birds which are included in the book. The novel contains passages on the travels of Ambrosius during the late eighteenth century, as well as short episodes about the people Paul left at home.

At last Paul does find a loophole in the system and visits the lake. Ultimately he is found out and censured, if not very severely. But the news that Theresa has dumped him and that Jan is dead tips him over the edge. He runs away from the camp, goes missing for months, and is finally picked up by American soldiers, who on finding that he is not dangerous hand him to the Germans. He is being transported back to Germany when the bus to the airport is blown up. Paul’s diaries and pictures end up in the possession of his former teacher, who thinks she concludes from them that he found his friend Nassim dead in the lake. This sad, meditative novel has much to recommend it to an English-language audience.

Norbert Scheuer was born in 1951 and works as a computer programmer. He has received a number of prizes for his novels: Flussabwärts (2002), Der Steinesammler (2010), and most recently Peehs Liebe (2012). In addition to these works C.H. Beck has published his collection of short stories Kall, Eifel (2006) and a volume of poetry, Bis ich dies alles liebte (2011). His novel Überm Rauschen (2009) was shortlisted for the German Book Prize and was chosen as Cologne’s Book of the Year for 2010. Among his awards are the Georg K. Glaser Prize (2006), the d.lit-Prize for Literature and the Rhineland Prize for Literature (both 2010). He lives in the Eifel region of Germany.

Verlag C.H.Beck is one of Germany’s best known publishing houses dealing both with books and magazines, employing a staff of over 400 and with approximately 6,000 titles in print. It has a strong base in academic titles and specialised works on history, ethnology, philology, literary theory, religion and philosophy, politics, art and law. Its fiction list has grown steadily and is respected for the importance its editors place on the literary and artistic merits of its titles.