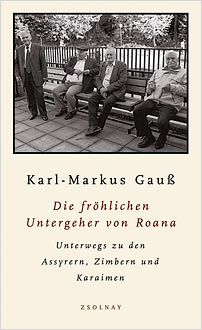 Karl-Markus Gauß was born in Salzburg in 1954. The city is still home to him, and he is the editor of the academic journal Literatur und Kritik. He is a regular contributor to publications such as the Süddeutsche Zeitung, Die Presse, Die Zeit, and Neue Zürcher Zeitung. His books have been translated into a multitude of languages and among the prizes he has received for his particular brand of reportage, literary travel writing and works on cultural and political subjects are the Charles Veillon European Essay Prize and the Georg Dehio Prize for writings on Eastern Europe. His special area of interest is in minorities on the edges of Europe.

German literature is rich in its tradition of travel writing, and Karl-Markus Gauß is an experienced practitioner in the field. Feted with a host of prizes, he has made the exploration of minorities and the dispossessed on the edges of Europe his area of expertise, and his subjects hitherto have included the Roma of Central and Eastern Europe, Aromanians in the Balkans, Ruthenians in Belarus and the Sephardim in Bosnia-Herzegovina.

In his fascinating and perceptive new book, he focuses on three remarkable ethnic groups: the Assyrian community in Sweden, the Cimbrians in Northern Italy, and the Karaites in Lithuania. The essays sparkle with a combination of wit and erudition; moreover they tackle the perennial question of what constitutes nationhood and whether a nation state can still exist in the twenty-first century.