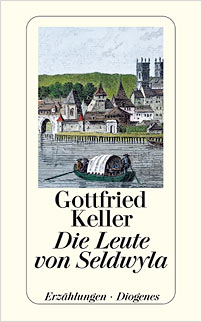 It was Walter Benjamin who first hailed the Swiss novelist, painter and politician Gottfried Keller (1819-1890) as a figure of Homeric proportions – a tribute alike to his thematic scope, his style, his inventiveness and his attention to detail. For all that, with the possible exception of Adalbert Stifter, he is for some reason, among Anglo-Saxon readers, the least well-known of all the great figures of nineteenth-century European literature. Keller was a master in the disparate fields of caricature, satire and fantasy. Zurich was his polis and the city’s history the well of his imagination. A democrat by conviction, a painter by inclination, and a poet by vocation, he served his community in a municipal capacity as Zurich’s town clerk and the cause of literature by scrutinizing the social and cultural state of its petits bourgeois inhabitants.

Der grüne Heinrich (1879), his contribution to the Goethean turned European conception of Bildungsroman, a genre of fiction devoted to exploring individual development and initiation, introduced a new notion of ‘becoming’ that was mostly associated with the hero’s vocation, namely his abandonment of dilettantism in his artistic pursuits in favour of developing his own personality more fully in social terms. In that sense, Keller’s understanding of Bildung found its place between Goethe’s legacy and what Thomas Mann was to offer in Der Zauberberg.

Arguably though, it was in his cycle of ten eminently accessible novellas, Die Leute von Seldwyla (1856-1874), that Keller displayed his narrative virtuosity at its most staggering. Seldwyla is an imaginary small Swiss town – twinned, as it were, with Elizabeth Gaskell’s Cranford. It is the ultimate provincial capital of foolish and petty vanities, but a place where tragedy can also strike. The cycle includes the novella Romeo und Julia auf dem Dorfe (‘Romeo and Juliet in the Village’), an unusually convincing variation on Shakespeare’s great theme that transposes the play into a village setting and shows the deterioration of two families and the fatal consequences of this for any belief in social harmony to be maintained.

Kleider machen Leute (‘Clothes Make People’), another of these pieces, suggests an extension of Carlyle’s Sartor Resartus in its obsession with dress and appearance, and perhaps a nod towards Jonathan Swift’s A Tale of a Tub. Keller shows in this novella how people believe in what they want to believe in, even at the price of deception, either of themselves or others.

Each of these novellas is ‘built round a particular mania’ (J.P. Stern), or idée fixe, which includes bigotry, excessive possessiveness and self-indulgence. Keller’s fondness for absurd situations, transfigurations of historical themes and his delight in playing with identities and authority makes him not just a Homeric poet but an indispensable author for our own times too.

Gottfried Keller (1819 – 1890) attended school in Zurich. At the age of fifteen he became apprentice to the landscape painter Peter Steiger and in 1837 to the water-colourist Rudolf Meyer, before studying for a time at the Academy of Fine Arts in Munich. He published his first poems in 1846. After two years as a student at the University of Heidelberg and a period of working in Berlin, he published, in 1855, the novel for which he is arguably best remembered: Der grüne Heinrich (Green Heinrich).

Gottfried Keller went on to write some of the best-known German-language short stories of the late nineteenth century.

His work is now in the public domain.

There is a wide array of German editions in print: pictured opposite is one of those published by Diogenes Verlag, Switzerland.

Professor Rüdiger Görner
is the current Chair of the German Department and Founding Director of the Centre for Anglo-German Cultural Relations at Queen Mary, University of London.