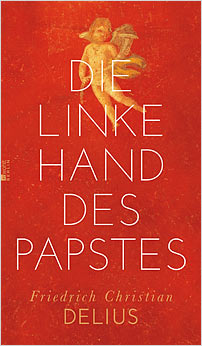 The Pope’s Left Hand is an extraordinary, beautifully constructed novella from one of Germany’s finest contemporary writers.

It is the first Sunday in March 2011 and the narrator of The Pope’s Left Hand, a retired archaeologist who now works as a tour guide in Rome, enters a Lutheran church to sit for a while before his next tour. He notices the Pope, dressed in a simple suit and clerical collar, around twenty feet to his right. Once seated, he is only able to see the Pope’s hands, and the entire novella consists of the narrator’s reflections during the time he spends seated in the church. With the Pope’s hands as his focal point, the narrator’s thoughts range across millennia of Roman, papal and Catholic history. He is preoccupied by two subjects in particular: the role of the horse at the intersection of Italy’s ecclesiastical and political history, and the debate surrounding the concept of original sin.

Delius skilfully models the workings of his narrator’s mind, conjuring a multi-layered cross-referencing of art, history, politics and religion which is intermingled with the sights and smells of Rome. The forty Berber horses that Muammar Gaddafi brought with him to a meeting with Silvio Berlusconi in Rome make the narrator wonder if the Pope’s hands might have formed a fist on this occasion, or whether ‘his hands were tied.’ The Berbers remind him in turn of the eighty Numidian stallions Augustine presented to the Roman emperor in exchange for the Church accepting Augustine’s doctrine of original sin. Which, in turn, reminds him of a one-night stand he had twenty years before.

The narrator is in constant conversation with himself about Christianity, musing about the Catholic Church’s role in Nazi Germany and what Romans really think of the German tourists he guides through the city. At one point the narrator’s thoughts are compared to the tiles of a mosaic: one by one they create a portrait of present-day Italy that the average tourist would never see. When the Pope leaves the church and the narrator looks at his watch, he realises that his reflections have barely lasted ten minutes.

The Pope’s Left Hand is full of political high drama as well as vibrant episodes gleaned from the history of Italy and the Catholic Church. It is a compelling and unusual narrative which makes for a deeply rewarding reading experience.

Friedrich Christian Delius was born in Rome in 1943 and grew up in Central Germany. Some of his best-known works are Ribbeck’s Pears (1991), The Sunday I Became World Champion (1994), The Walk from Rostock to Syracuse (1995), My Year as a Murderer (2004) and Portrait of the Mother as a Young Woman (2006). Delius has won numerous awards, most recently the German Critics’ Prize, the Joseph Breitbach Prize and the Georg-Büchner-Prize.

Rowohlt.Berlin Verlag was founded in Berlin in 1990 after the wall came down. It belongs to the Holtzbrinck Publishing Group. Rowohlt.Berlin Verlag publishes literary fiction as well as political and narrative non-fiction. Its authors include, Wolfgang Büscher, Wolfgang Herrndorf, Herfried Münkler and Kathrin Passig, amongst many others.