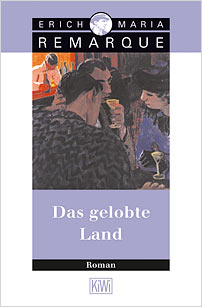 The Promised Land is a highly engaging novel by one of the most widely read and filmed European authors, Erich Maria Remarque (All Quiet on the Western Front). A moving and compelling story that follows the intersecting lives of a group of immigrants in New York during the final years of World War II, this tale of persecution and loss, of new beginnings in the New World and hope for a peaceful future, is ripe for translation into English.

The protagonist and narrator, Ludwig Sommer, has endured various forms of persecution by the Nazis and is haunted by memories of his time in a concentration camp and of witnessing the murder of his father. Sommer’s flight from Nazi Germany across continental Europe before finally reaching the ‘promised land’ of the USA involves enduring friendships with other emigrants, many of whom are reunited in New York.

The novel’s opening scenes take place on Ellis Island in the detention centre for aspiring immigrants to the USA. New York City is tantalisingly close and yet achingly far away for the refugees who have suffered so much to get there and now finally dare to hope that salvation is at hand. Sommer’s own salvation is far from guaranteed and hinges on all sorts of contingencies, not least of which is the need for the immigration authorities not to recognize that he is travelling on somebody else’s passport. The original Ludwig Sommer was a mentor and friend to the narrator, from whom he acquired expert knowledge in the fine art and antiques trade which enables him to earn a living once he does eventually reach New York City. Unlike the narrator, the passport’s original owner was Jewish, and so the novel’s protagonist is required to assume an identity which is simultaneously a death sentence in 1940s Europe and a lifeline among the New York immigrant community.

The novel charts Sommer’s progress in finding his feet in New York. Much of the action centres around the Hotel Rausch, a cheap boarding house which is home to a diverse group of emigrants whose characters are richly and lovingly painted by Remarque. The hotel doorman, Wladimir Meukoff, is a chess-playing Russian octogenarian who presides over the goings-on at the hotel and dispenses his wisdom along with liberal doses of home-made vodka and sleeping tablets. Sommer relishes the city’s cuisine and cultural life while never forgetting the suffering that has led him there. Remarque reflects movingly on the emigrant’s fate never to feel entirely at home, neither materially nor intellectually, since the past remains an almost intolerable burden. The old friendships which Sommer resumes in New York, and even the new relationships he forms, including his romantic attachment to the alluring Italian fashion model, Maria Fiola, are moulded by his experiences of persecution.

The Promised Land was Remarque’s last novel which he worked upon up until his death in 1970. It was first published posthumously in 1998, although another substantially edited version of the text entitled Schatten im Paradies was published soon after Remarque’s death in 1971. Shadows in Paradise, the English translation by Ralph Manheim, appeared in 1972. Remarque’s thoughtful reflection on the inhumanity of warfare and the emigrant’s predicament, his deft characterization, and his colourful accounts of life in New York during World War II will ensure that Das gelobte Land finds an extensive readership in English translation. Ludwig Sommer’s compelling story remains intriguingly open-ended, but new readers will readily engage with the rich detail and sympathetic portrayal of his life in The Promised Land.

Erich Maria Remarque (1898-1970) was born into a working class family in Osnabrück, Germany. He was conscripted into the army at eighteen until he was wounded and sent back to Germany in 1917. After the war Remarque held a variety of jobs, including that of sports journalist, before devoting himself to literary writing. He went on to publish more than ten novels, many of which were best-sellers and adapted into successful films. Remarque’s military experience during World War I provided him with material for his best-known literary work, the anti-war novel Im Westen nichts Neues (All Quiet on the Western Front), published in 1929. In 1932 Remarque left Germany to live in Switzerland and France. Remarque’s books were banned by the Nazis who claimed he was a descendant of French Jews. He remained in Europe until 1941 when he emigrated to the USA, returning to Switzerland in 1948 where he lived for the rest of his life.

Previous works:
Remarque is one of the most widely read authors of German literature in the twentieth century and his work has been translated into over fifty languages. Im Westen nichts Neues (All Quiet on the Western Front), published in 1929, is concerned with the horrific wartime experiences of German soldiers in the trenches. Its sequel, Der Weg Zurück (The Road Back), published in 1931, deals with the fate of army veterans in post-war Germany. Other well-known examples of Remarque’s work include Arc de Triomphe, first published in English as Arch of Triumph in 1945, Der schwarze Obelisk (The Black Obelisk),published in 1956, and Die Nacht von Lissabon (Night in Lisbon), published in 1962. The works of Erich Maria Remarque are available from Kiepenheuer & Witsch, including a major biography, Als wäre alles das letzte Mal by Wilhelm von Sternburg (2000).