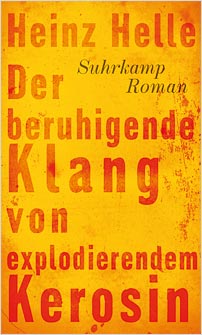 The Reassuring Sound of Exploding Kerosene is an arresting debut from a major new literary talent.

Helle’s exceptional novella charts the intellectual crisis of its introspective narrator-protagonist. In the opening section we see the narrator saying goodbye to his girlfriend and arriving in New York, where he is obviously alienated and lonely. We gradually work out that he is studying philosophy. In a series of disturbing scenes, he imagines himself in various transgressive roles including hitting a strange child, and picking up women and having sex with one of them while she’s asleep. When the narrator’s girlfriend comes to New York to visit him, everything goes wrong. The narrator is trapped in a circle of thoughts about sleeping with other women which he never expresses out loud. Their conversation dries up. She accuses him of not being interested in anything and eventually leaves him.

The narrator then attempts to pursue his philosophical studies. He is supposed to be working on consciousness and an understanding of human thought processes, but his own thoughts are so tangled that he can’t express them. At his final presentation, he angers the philosophy department at City University by simply not saying anything. In the middle of his silence, he realises that his constant analysis of his life has stopped him from living: both from having a fulfilling relationship and from doing his work as a philosopher. In the book’s affecting closing section, we see the narrator watching a football game at a bar, still thinking all his thoughts but now telling himself he has a proper, useful job and a meaningful life.

Heinz Helle’s narrative is superbly crafted so that the writing style precisely reflects the narrator’s degree of psychological distress. By the end of the book, the short, disjointed scenes become almost painful to read, demonstrating an antagonistic relationship between philosophy and life. Although it is an impressively original work, The Reassuring Sound of Exploding Kerosene can be placed in the popular modern tradition of the alienated intellectual adrift in a foreign country, encompassing contemporary American authors like Teju Cole and Greg Baxter.

Heinz Helle was born in 1978. He studied philosophy in Munich and New York. He has worked as copywriter for advertising agencies, and is a graduate of the Swiss Literature Institute in Biel, where he lives with his wife and daughter. The Reassuring Sound of Exploding Kerosene is his first novel.