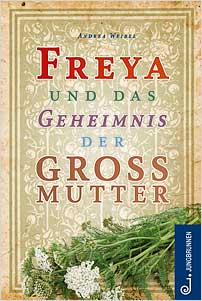 This is a terrific debut novel from an author with not only an expert eye for intriguing historical detail but also a rare gift for strong plot and vivid characters.

Freya Silbernagel, an orphan, lives high up in the Alps until she is sent down to the valley for school. The schoolmaster is ignorant and tyrannical, as are the relatives she lodges with; her uncle is a religious bigot and her aunt sneers at the other villagers, especially the tenant farmers on the wrong side of the stream. Freya befriends the son of one of these families and learns that some of them preserve old pagan beliefs. A midnight revel in the forest introduces her to some of their mysteries. Freya, however, has a family mystery of her own to investigate. There are no supernatural foes, but the enemies Freya contends with are the more convincing: a cow’s infected udder becomes a major plot point, sickness and childbirth in the pre-modern age are described as terrifying and dangerous, and human folly and evil are shown for what they are.

While raising questions about superstition, science, religion and ethics, this is a low-key but deeply involving story that promises to be a stand-out success.

Andrea Weibel was born in Switzerland in 1966. She grew up in the canton Zug and trained as a teacher. Thereafter she studied history in Zurich and started to write articles for a newspaper. After her final degree she worked first as a journalist, then for the Swiss Historical Encyclopedia. She lives with her partner in Bern.

Jungbrunnen was established in 1923 with the aim of providing good literature to children and young people who had little access to books. The publisher’s emphasis still rests on quality, both of text and image, and on taking their young audience seriously. Many Jungbrunnen books have become classics and are already delighting a third generation of children, not least Mira Lobe’s Die Omama im Apfelbaum, which has been translated into twenty-one languages.