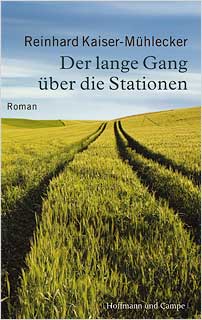 Here is a novel to make Thomas Hardy seem positively cheerful. The setting is a small farm in Austria in the 1950s, although until this is revealed it could also be relating to an earlier time and the whole has something of the magic of the recent film Stellet Licht about the Amish community in Mexico. The narrator is Theodor, the farmer himself, and the story begins at the point where he has just brought his new wife back to live on the farm with his ageing parents. This city-bred girl (we are never told her name) seems initially to settle in well but soon begins to hanker after her previous life and makes increasingly frequent trips back to Vienna, sometimes taking Theodor along with her despite his hatred of town life and his lack of any interests in common with her friends. Is she unfaithful when she visits Vienna alone? Theodor cannot bring himself to confront her with this. His outlook is traditional, shaped by his life and work; he has no time for politics or the wider world outside.

His father is suffering from some long-term illness and is confined to bed at the farm. It appears that he and Theodor are not on speaking terms, and he dies two thirds of the way through the story. Theodor’s neighbour seems to be the only person he has any real connection to but this friend commits suicide, in a strikingly dramatic scene, unable to cope with life after the death of his wife. Theodor is the one to find him, hanging from a damson tree, and when the local priest denies the suicide proper Christian burial Theodor is deeply angered – later too he almost comes to blows with other farmers when he hears his friend being disparaged. The last we see of this decent but complex character is as he wanders through deep snow into the woods with his bottle of schnapps. We are left to ponder his fate.

This book is a highly individual account of one man’s existence in the hitherto very traditional but now quickly changing rhythm of rural life, and as it proceeds the slow unfolding of the narrative works its magic. A brooding, compelling look into a little-known world now gone.

Reinhard Kaiser-Mühlecker was born in Kirchdorf an der Krems, Austria, in 1982 and grew up on his parent’s farm in Eberstalzell, Upper Austria. He studied agriculture, history and international development in Vienna. He received a writer’s scholarship in 2007 and has published shorter pieces thus far. Der lange Gang über die Stationen is his first novel and has already been awarded a prize.