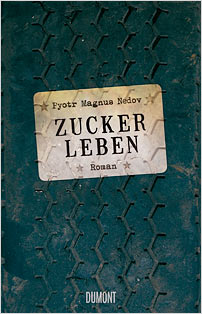 The action in Pyotr Magnus Nedov’s debut novel is split between Italy and the former Soviet Socialist Republic of Moldova. The novel opens in 2011 as we join the mysterious Tolyan Andreewitsch in his quest to locate a missing Georgian tea tin. Having reached Abruzzo in his Ford Transit minibus, he finds his efforts thwarted by a suicidal teenage couple who have recently lost their jobs at a local sugar factory. Suddenly Andreewitsch is confronted with an altogether more vital problem: he must find a way of keeping the young lovers alive.

Luckily, he has an ace up his sleeve: a tale of youthful derring-do, which takes place in the industrial city of Donduşeni. The action cuts to 1991 where, in an increasingly fractured Soviet Union, the young speculator Pitirim Tutunaru dreams of a carefree life in Italy. His ticket to pre-fiscal-crisis paradise rests upon finding the forty tons of sugar owned by factory director Hlebnik, who is presumed to have emigrated to the U.S. Having achieved this initial aim, Pitirim is surprised to discover that Hlebnik has not only been moonlighting as the President of the Donduşeni Committee for Sobriety but is using this status as a cover for illegally distilling schnapps in his dacha. With the assistance of a motley crew of dreamers, academics and artists, Pitirim hopes to carry on the work of the erstwhile sugar factory director and relocate to Italy on the profits. So far, so good. But it soon becomes clear that the road west is paved with many obstacles, among them petrol shortages, nationwide power cuts and the presence of a group of black marketeers eager to make the distillery their own. How will the story end? In 2011, Tolyan Andreewitsch continues the story, hoping the answer will imbue his teenage travelling companions with a newfound zest for life.

This is a stylish, original first novel, which cleverly juxtaposes the disintegration of the Soviet Union with the European financial crisis. In so doing, it adds a layer of complexity to the wry, knowing narrative tone. Nedov’s writing calls to mind the work of Ukrainian author Andrey Kurkov, whose darkly comic novels about the post Sovietera (some involving penguins) have met with widespread critical acclaim in the Anglophone world. The Sweet Life is an inspirational debut from a talented young author.

Pyotr Magnus Nedov was born in the Soviet Union in 1982 and lives in Cologne. He grew up in Moldavia, Romania and Austria. He studied Celtic culture, French literature, and film in Paris, Moscow, Montreal, Vienna, and Cologne. He has a PhD in film studies and has worked as an archaeologist on the excavation site around the city hall square in Cologne.