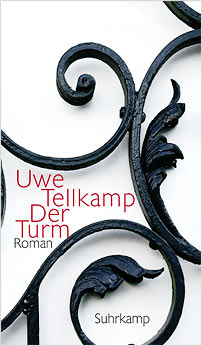 Well, all right then, here we go again. Another novel about life in the GDR, already a favourite both with writers and film-makers. But this one is different. Already it is being hailed for both its style and its perspectives, and as for its length of nearly a thousand pages, this turns out to be an advantage rather than a drawback, given the variety of the characters it portrays and the number of events it describes.

Take first the three main characters, all related and all from Dresden. There is the son, Christian Hoffmann, an intelligent, musical, but introverted and unprepossessing young man, whose difficulties are exacerbated as he comes up against the harsh realities of life in the Volksarmee. He is aiming for medicine, but after being sentenced to twelve months imprisonment for reading subversive literature and criticising the regime ends up in the chemical industry instead. His father, Richard, is made of sterner stuff. A successful surgeon, he has long conducted an affair on the side which has produced at least one child. He and his wife try to keep in with the authorities without too much loss of integrity, and Richard does his best to resist pressure from Stasi officials to inform on colleagues at the hospital. Last of the three comes Richard’s brother-in-law, Meno Rohde, a member of a Dresden publishing house, who provides the reader with an insight into the world of literary production and censorship. Round this main family a great number of events and characters spin, until the book concludes with the peaceful demonstrations in Dresden and the fall of the Wall.

What this novel offers, in fact, is a panoramic view of life in the German Democratic Republic between 1982 and 1989. Composed in a variety of styles and narrative forms, it includes diary entries, letters, speeches given during a tribunal and fragments of characters’ literary endeavours. But this wealth of material by no means overwhelms the reader, as Tellkamp weaves the different narrative strands and styles seamlessly.

German reviews so far rightly suggest comparisons with Walter Kempowski and Thomas Mann. We over here now await with eagerness access to this major novel.

Uwe Tellkamp was born in 1968 in Dresden. After his military service he lost his place at university where he would have studied medicine due to ‘political unreliability’, was arrested in the course of events of 1989, and afterwards continued his studies in Leipzig, New York and Dresden. After graduation he worked as a surgeon in an accident and emergency clinic in Dresden. He now lives in Freiburg and writes full-time. In 2004 he won the Ingeborg Bachmann Prize in Klagenfurt. His first novel, Der Eisvogel (‘The Kingfisher’), was published in 2005.