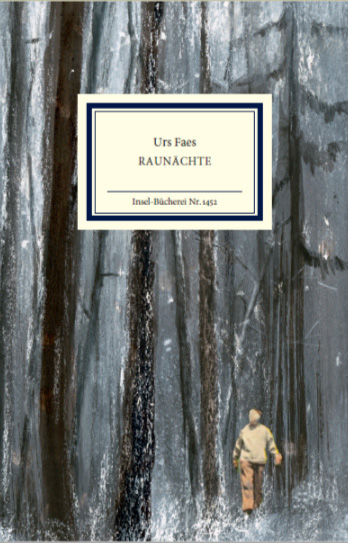 In this deeply atmospheric novella, a man returns to his home village, four decades after a bitter dispute with his brother over the inheritance of the family farm. Narrated in spare, beautiful language, everything about this book is in perfect harmony.

The narrative takes place in the Black Forest during the ‘Raunächte’ – the twelve nights between Christmas and Epiphany. This is a time of superstition in Germanic folklore, especially in rural communities. As he makes his way through the unforgiving winter landscape, the tale gradually unfurls to reveal how the family feud came about. The narrative is achingly beautiful, matched by haunting illustrations by the award-winning German artist Nanne Meyer.

Manfred has returned to the village in search of reconciliation with his younger brother Sebastian. He takes a room at the local inn, where the landlord tells him that Sebastian has become a recluse. He is known as the victim of a run of misfortune that began soon after their parents died. It started with a disease that spread amongst the farm animals, after which his wife became sick and eventually died. There is rarely a light burning at the isolated farmhouse; the only sign of life is a thin trail of smoke rising from the chimney. Each day, Manfred goes out into the wilderness on foot, making his way through the landscape, as the reader discovers more about what happened.

Manfred delivers a letter to the farmhouse, in which he asks Sebastian to meet with him. As his last hopes of reconciliation begin to fade and the weather is at its bitterest, he takes another walk. Despite the landlord’s warnings and even though he knows the region well, he loses his bearings. He wakes up in bed back at the inn, where he is visited by both the doctor and the priest. His health weakening, he still waits for his brother to come. The narrative switches between his memories and the present day with increasing frequency, echoing his fevered state, and builds tension for the novella’s conclusion. At long last, the landlord announces the arrival of a visitor. The narrative ends as Sebastian steps into the room and greets him.

The Twelve Nights combines stunning prose that reads like a hymn to the winter landscape and a story so captivating it belies its brief length. This is a timeless tale of how rage and guilt triggered by family disputes can leave a person trapped in the past, however far away they may go.

Urs Faes, born in 1947, lives and works in Zurich. His works have been awarded numerous prizes, including the Swiss Schiller Prize and the Zolliker Kunstpreis. His novel Paarbildung was shortlisted for the Swiss Book Prize