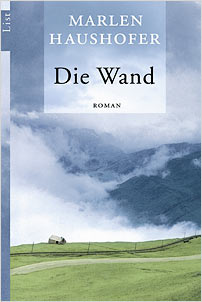 A middle-aged widow wakes up one day in her cousin’s holiday home in the countryside and finds herself alone; her hosts have failed to return from an evening out in the nearby village. Perplexed, the woman investigates, accompanied by her hosts’ dog, Luchs. The pair soon encounter an invisible wall, separating them from the world outside. Beyond the wall is a man, frozen mid-motion; all is still. The narrator quickly establishes the limits of her new, walled world, a sizeable area that is partially forested and occupied by a variety of animals.

Haushofer’s 1963 novel begins arrestingly. The wall of the title is never explained. The nameless, first-person narrator occasionally anticipates the arrival of the ‘victors’ who have created it. But they never come and their existence is by no means certain. Like Cormac McCarthy’s The Road, this dystopian work refuses to offer answers and simply presents the new reality as it is. Indeed, a great deal of the power of this unnerving and moving novel arises from its painstaking attention to detail. This meticulousness encourages a strong and instructive identification with the narrating consciousness at its heart.

The heroine of The Wall is a female Robinson Crusoe, learning to live as best she can amidst nature. She must ensure her own survival and that of her companions: Luchs the dog; a nameless cat who later bears kittens; and Bella, a cow found nearby. She learns to cultivate vegetables, to hunt, to milk Bella, and to prepare and preserve meat. She must provide shelter and food for Bella, engaging in heavy physical labour as she carries out such tasks. We follow these activities in detail, inhabiting as we do the narrator’s mind and being compelled to wonder what we would do, how we would survive.

The novel offers a far-reaching and profound examination of what it means to be human. This is a ‘green’ book and a ‘posthuman’ one; it explores humans’ interaction with the non-human world and it decentralises the human being. The narrator’s very body changes; her hands become tools, her appearance is irrelevant. Her femininity is revealed as an artifice. What matter in her world are survival, continuity, occasional creature comforts. The companionship of animals is of profound importance here. Bella is key to the narrator’s survival, demonstrating the interdependency of human and animal. The cow’s possible pregnancy is a major source of dramatic tension for a long stretch of the narrative. Will she calve? It is testimony to the power of the writing – deft, unfussy, clean – that we care deeply. The description of Bella’s eventual calving is gripping and affecting. All the animals are sharply evoked, acting as major characters: a remarkable technical achievement. Luchs, in particular, is a powerful, touching presence; his demise during the shocking climax proves devastating.

The fate of the narrator’s writings is uncertain: who will read them, if she is the last human? Why does she write? This message-in-a-bottle demands an active engagement with some of the most pressing issues of our age: the place of the human, nature, technology, animality; and it does so with subtlety, wit and compassion. The Wall was critically acclaimed upon publication, winning the 1963 Arthur Schnitzler Prize. But it did not attract widespread attention until a new edition was published in 1983, when its concerns seemed fresh and pertinent. Renewed interest is assured by the film that is currently under production, with the principal role filled by German actress Martina Gedeck, best known for her starring role in Oscar-winning The Lives of Others. Haushofer herself termed the work ‘eine Katzengeschichte’ – a story about cats – but it is much more than that. Its resourceful heroine, who attempts not to master nature but rather to live within it, offers a powerful and provocative model for our times.

By Emily Jeremiah
Emily Jeremiah is a lecturer in German at Royal Holloway, University of London, and an award-winning translator of poetry. She lives in London.

Marlen Haushofer was born in Frauenstein in Austria in 1920. She studied German in Vienna and Graz, subsequently settling in Steyr. In 1941 she married Manfred Haushofer, a dentist. She later divorced then remarried her husband, and had two sons. Haushofer published her first novel, A Handful of Life, in 1955. In 1958, We Murder Stella was published. The Wall came out in 1963, and The Loft, her final novel, appeared in 1969. Haushofer received the Grand Austrian State Prize for literature in 1968. She died of cancer in Vienna in 1970.

The Wall was published in English by Quartet books in 1991, translated by Shaun Whiteside. Quartet are publishing Haushofer’s novel The Loft, translated by Amanda Prantera, in May this year.