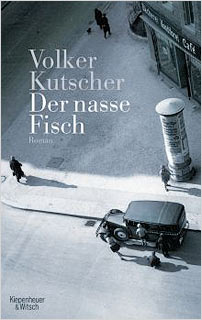 Location, Berlin. Time, spring 1929, when the celebrated ‘Bloody May’ day of Communist rioting and other upheavals briefly threatened the security of the state. Principal character, Gereon Rath, disillusioned loner from the Cologne police force transferred to the Berlin vice squad after despatching a psychopathic killer in self-defence. His new job begins with the discovery of a man’s body in a car in the river Spree. The victim, a Russian, had obviously not drowned but been murdered (and tortured) first. And before Rath knows where he is, he is uncovering a plot to smuggle eighty million Marks from Communist Russia to Berlin. Villains galore. Fascinating, seldom explored background. You think you know Berlin? Think again. A good tough read and a mesmerising setting.

Volker Kutscher, born in 1962, studied German, Philosophy and History and started a career as an editor for a daily newspaper before he wrote his first thriller. Currently he is a full-time writer and lives in Cologne. Previous works include: Bullenmord (1996) and Vater unser (1998), both written with Christian Schnalke; Der schwarze Jakobiner (2001) – all Emons Verlag