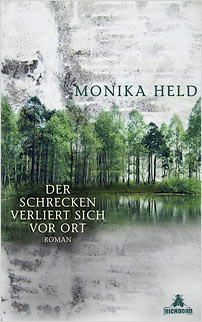 This Place Holds No Fear tells the story of a couple’s struggle to live with the never-ending horror of Auschwitz. Held’s novel is based on the true story of an Auschwitz survivor and witness at the Frankfurt Auschwitz trials.

In 1964 Heiner is called from Vienna to Frankfurt to testify at the Auschwitz trials, where he meets Lena who is working as a translator. As the trial progresses, Heiner bears witness to his experiences of being deported to Auschwitz as a young man, and tells how he survived life in the camp. He and Lena begin a cautious love affair, but for a long time both are unsure whether their love will be strong enough to cope with the trauma that haunts him. Heiner’s first wife left him after the war, taking their child with her after she found that she could not live with his nightmares, his inability to work or his emotional emptiness. Heiner knows that if they are going to stay together, Lena will have to accept the shadow of Auschwitz that marks him. When she does, they start to build a new life around the debris of Heiner’s past.

During a visit to Auschwitz in the 1980s the couple finally come to understand that those who were not there, even Lena, will never be able to grasp the true horror of the place. Lena remains excluded from the core of Heiner’s being, but she is his joy, nonetheless. When Heiner’s health deteriorates, they follow doctors’ orders and move north to the sea. They find a home in a close-knit community used to defending itself against the elements and here they discover a freedom and a kind of peace they have not known before.

In clear, unobtrusive language, Monika Held paints an emotive picture of life and love governed by trauma. Heiner’s suffering is omnipresent, and Lena’s struggle to hold her own in an imbalanced relationship dominated by his past is deeply moving. His stories are horrific and disturbing, but he cannot survive without them. Lena learns to cherish her own past despite its apparent insignificance and to live alongside Heiner. Heiner’s story and those of his fellow survivors are based on first-hand reports by Auschwitz survivors, recorded by Monika Held in the late seventies and early eighties. This Place Holds No Fear shows how the lives of survivors and those around them can never escape from the interminable atrocities of the concentration camps.

Monika Held was born and grew up in postwar Hamburg. She apprenticed in publishing and edited a company magazine before becoming a freelance journalist. Her career takes her all over the world, and her research focuses on the people at the centre of the stories. She has been awarded many prizes for her journalism and her political commitment. She lives in Frankfurt am Main, Germany.

Eichborn is the publisher of Look Who’s Back by Timur Vermes, a novel playfully asking what would happen if Hitler were alive today. Published in September 2012, instantly on the bestseller list where it has remained in the top five since publication, and with translation rights sold for 29 languages (World English: Maclehose Press), it turned out to be THE German novel of the year.  Many Eichborn works have been translated into English, including A Woman in Berlin by Anonymous, The Old Child, The Book of Words and Visitation by Jenny Erpenbeck, The 13 ½ Lives of Captain Bluebear and Wild Journey Through the Nightby Walter Moers, W.G. Sebald’s The Emigrants, The Rings of Saturn and Vertigo as well as Ice Moon and Silence by Jan Costin Wagner. Eichborn became a division of Bastei Luebbe, Germany’s largest independent publishing group, in 2011, and continues to discover and establish original and exciting author’s voices with its characteristic verve and vigour.