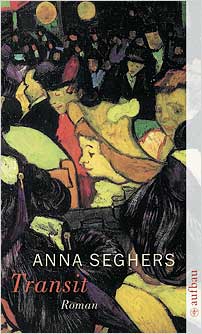 Anna Seghers’s semi-autobiographical novel Transit (first published in English, Spanish and French in 1944, and in German in 1948) explores the plight of German refugees from Hitler attempting to leave France via the seaport of Marseilles between the French capitulation in 1940 and the Spring of 1941. The story is told from the perspective of an unnamed narrator, a German engine-fitter who has escaped from a Nazi concentration camp (in fact, for the second time) and fled to Paris. Here he encounters a fellow escapee who asks him to deliver papers to a German writer called Weidel. The narrator finds Weidel already dead and assumes his identity, hoping to make use of his visa for Mexico. When he reaches Marseilles to avoid recapture he adds the papers of another deceased German, one Seidler, so from this point onwards he is juggling with three separate identities: those of Weidel, Seidler, and his own.

The narrator’s life in Marseilles includes visits to his friends the Binnets, for whose invalid son he obtains the services of a German doctor, and frequent and lengthy sessions in cafés and bars, in one of which he meets a young woman called Marie. She, by a strange twist, is not only the lover of the German doctor who helped the Binnets but also the wife of the late Weidel, of whose death she is unaware. Withholding the truth for obvious reasons, the narrator helps the couple to obtain emigration papers, and they board a ship called the Martinique to start a new life elsewhere. But, as the reader is aware from the first page of the book, their ship is destined to be sunk.

Transit itself is highly atmospheric, capturing and evoking the mood of the time: the constant and uncertain waiting, the labyrinth of complex bureaucracy, and the impending threat of Nazi aggression. Heinrich Böll praised it as the author’s most beautiful work and a critic in 2005 perceptively defined it as a ‘late modern thriller – without thrills’. Reminiscent at times of John Buchan’s The Thirty-Nine Steps, its parallels with the pathos of the 1942 film Casablanca are, of course, obvious. Surely a Forgotten Gem ready-made and a gateway to some more of Seghers’s excellent writing.

Anna Seghers (born Netty Reiling, 1900-1983) became famous for depicting her experiences during the Second World War and her exile in France and Mexico. Her works owe their distinctiveness to her ability to reveal the outlines of an era between personal aspects.

In so doing she addresses all the momentous changes of the century in which she lived – the disruption after the First World War, the conflicts during the Weimar Republic, the development of National Socialism and the Second World War, the division of Germany and the consolidation of two German states in a divided world. Her political statements show her connection to the time: like those of most intellectuals of her generation, they are shaped by the contradictory combination of critical clairvoyance and the need to find historical and philosophical assurances to hold on to.

In her novels and stories Anna Seghers finds a language that preserves the suffering of the victims as well as an almost infinite confidence in the existence of a human essence that cannot be destroyed by any dictates or political perversions. Seghers combines cosmopolitan openness for the culture of the old and the new world with an awareness of her own roots in German culture and history. Her writing was shaken neither by the exile to which she was at one point sentenced nor by the holocaust, in which she lost her family.

If there is still some kind of canon of literary works of the twentieth century that commend themselves to rediscovery beyond the limits of their epoch, it has to include these works of Anna Seghers.
Selected Publications:
Aufstand der Fischer von St. Barbara (Revolt of the Fishermen of Santa Barbara), first published in 1928; Das siebte Kreuz (The Seventh Cross), first published in 1942; Der Ausflug der toten Mädchen (The Excursion of the Dead Girls), first published in 1943. Her works have also appeared in translation.