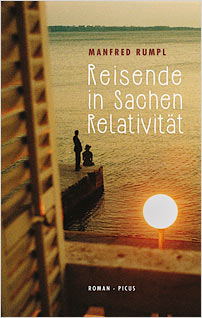 Erwin Schrödinger, the Nobel Prize-winning physicist and associate of Albert Einstein, one of the most remarkable minds of the twentieth century, lies dying in a Viennese hospital. Travels in Relativity follows this great man as he takes stock of his life with all its scientific – and amorous – adventures.

Schrödinger has suffered from repeated bouts of tuberculosis during his life, but this is to be his last. The medication causes vivid dreams, which frequently take the form of excursions into his colourful past. His life has been a perpetual quest for knowledge which has taken him all around the world, and the book’s chapters are set in various places that Schrödinger has called home. We learn about his formative years, learning English from his British maternal grandmother and growing up in Vienna. He begins a passionate love affair with Maya but loses touch with her during the First World War while fighting on the front line. Schrödinger then meets his wife, Annemarie Bertel, known as Anny. His early career is punctuated by spells in a sanatorium in Arosa, Switzerland, where he receives treatment for tuberculosis and formulates his famous wave equation. It is here that he resumes his relationship with Maya, while Anny also begins an affair with another man.

Schrödinger opposes Nazism and flees Germany, shortly before being awarded the Nobel Prize in Physics. Meanwhile Maya becomes pregnant with Schrödinger’s child and lives as his mistress. His unconventional family situation causes problems at Princeton, where Schrödinger gives lectures and associates with Einstein and other eminent scientists but is prohibited from taking up a professorship. He moves to Oxford instead, with Anny, Maya and the baby, Ruth, where together they settle into some sort of routine. Schrödinger eventually moves his family back to Graz, Austria, but the Nazi regime has taken hold and he is wanted by the Gestapo. He and Anny escape through Europe, ending up in Dublin, where Maya and Ruth join them. Maya eventually leaves the family and remarries after Schrödinger fathers two more children by different women. The novel’s final chapters return to Schrödinger’s hospital bed, with Anny by his side.

Manfred Rumpl’s inventive novel follows the life of a scientific genius, illuminating his private doubts and public triumphs. Schrödinger’s difficult personal life is laid bare alongside his continual quest to expand the possibilities of human knowledge.

Manfred Rumpl was born in Austria in 1960 and worked a variety of jobs in Germany and Austria before studying philosophy in Graz and Vienna. For previous work he has won the literary aspekte award as well as the German Crime Fiction Prize. He lives in Vienna and the Steiermark.