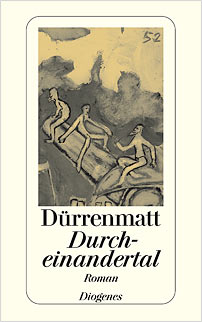 Durcheinandertal is Dürrenmatt’s last novel: an accomplished satire composed of deftly interwoven narrative strands which combine scenes from Swiss rural life, encounters with the divine, and excursions into the world of organised crime. The action takes place in an apparently godforsaken Swiss village in the so-called ‘Vale of Confusion’. Godforsaken, perhaps – yet in the novel’s opening scene someone resembling ‘the God of the Old Testament but without a beard’ is lurking on the village road. It transpires that this man, as head of an international organised crime syndicate, is in fact a sort of Godfather. People bring their problems to him and he resolves them as he sees fit, aided by his faithful assistant, Gabriel. The novel revels in the opportunities for comparisons between the self-styled ‘God Without a Beard’ and the divine God, both of whom are referred to as ‘the Great Old Man’, with entertainingly confusing consequences for many of the characters.

The Vale of Confusion is on the margins of Swiss society, geographically as well as socially. The inhabitants of the village are largely unenterprising and idle, relying exclusively upon the business generated by the health spa across the valley for their livelihoods: ‘If the resort was empty during the winter the village returned to its insignificance.’ Things are thoroughly shaken up in Durcheinandertal, however, when The God Without a Beard is approached by a crackpot theologian during a stay at the resort. The theologian, Moses Melker, who has enjoyed considerable popular success with his books that espouse a theology of poverty to the super-rich, proposes to the Great Old Man that he uses some of his God-given assets to establish a unique relaxation spa for millionaires who are similarly blessed.

The Great Old Man is tickled by Melker’s suggestion and duly acquires the health resort in Durcheinandertal in order to turn it into a House of Poverty: where the über-rich can spend time without material comforts and thus be relieved of the oppressive burden of their wealth. Moses Melker is sent on an international lecture tour in order to drum up business for the unusual anti-luxury hotel. The Great Old Man’s business dealings are shrouded in mystery and intrigue and largely conducted through a dubious law firm based in Zurich, Raphael, Raphael & Raphael, who act on behalf of numerous shady clients. The House of Poverty opens for the summer season and is fully booked with company chairmen and wealthy widows who are anxious to free themselves of the trappings of wealth and experience the simplicity of poverty. Meanwhile, the villagers of Durcheinandertal suffer as the House of Poverty generates very little work for them, relying as it does on the guests catering for themselves and sharing in the daily upkeep of the hotel.

It is the former health resort’s winter incarnation which ultimately wreaks the most havoc on The Vale of Confusion, however. Although the building is supposedly empty during the winter, it is in fact teeming with international criminals. Big Jimmy, Marihunana-Joe, Baby Hackmann, Holy-Brandy and Alaska-Pint are notorious murderers, robbers and rapists belonging to the crime syndicate headed up by the Great Old Man. Supervised by Count von Kücksen of Liechtenstein, who deals in art forgeries, they use the building as a safe house during the winter, a place unknown to the FBI and other security agencies. They also use it as a clinic where criminals can receive radical plastic surgery to have their faces remodelled, making them unrecognisable when they return to the criminal underworlds of the East and West coasts of the USA. The village’s milkmaid, daughter of the mayor of Durcheinandertal, attracts the attentions of the bored, sex-starved gangsters ensconced in the hotel, and is attacked and raped. Elsi’s rape is a pivotal event within the novel. Dürrenmatt uses this violation to satirise the moral equivocation, judicial incompetence and corruption at the heart of Swiss valley life, and the rape is also the way in which the villagers in the Vale of Confusion become aware of the unorthodox winter guests in the resort across the valley, eventually precipitating the dramatic confrontation between villagers and criminals in the novel’s concluding scene.

Like Dürrenmatt’s earlier novel Justiz (Justice, 1993), Durcheinandertal portrays Switzerland as a morally and economically corrupt country riddled with international criminal organisations whose activities are, however unwittingly, supported by the Swiss population. The police, the legal and political systems and the army all contribute to a society in which both large-scale and petty crime are allowed to flourish virtually unchecked. The humour and imaginative flair with which Dürrenmatt delivers his provocative satire of Swiss society do not take the edge off his moral critique, but rather lend it additional force. Tragicomedy is Dürrenmatt’s preferred genre and it is certainly an effective approach to the financial turmoil in Durcheinandertal, ripe for an English translation to chime with the twenty-first century’s own financial confusion.

Friedrich Dürrenmatt (1921-1990) is well known both as a novelist and dramatist. The son of a Protestant pastor and grandson of a Conservative politician, Dürrenmatt was born in Konolfingen, near Bern, and studied at the Universities of Bern and Zürich. His first play was Es Steht Geschrieben (It Is Written, 1947), but his theatrical breakthrough came in 1952 with Die Ehe des Herrn Mississippi (The Marriage of Mr. Mississippi), which established his international reputation. Other plays include Der Besuch der alten Dame (The Visit, 1956) and Die Physiker (The Physicists, 1962). Dürrenmatt’s prose works include the enduringly popular novella, Der Richter und sein Henker (The Judge and His Hangman, 1950), and Das Versprechen: Requiem auf den Kriminalroman (The Pledge: Requiem for the Detective Novel, 1958).