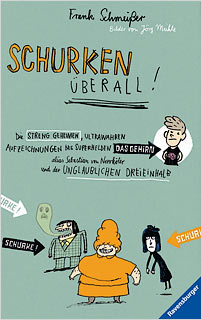 Eleven-year-old Sebastian keeps a secret diary which details his adventures as The Brain, leader of a group of superheroes. His gang includes Barbara (Action-Bärbel), who is hyperactive and refuses to take her medication, Martin (The Chameleon) who is so unnoticeable as to be completely invisible, and Martin’s invisible friend Dieter, who is only allowed half a vote at meetings due to his imaginary status and his cowardice.

In the tradition of Roald Dahl, Sebastian records the heroic activities of ‘The Amazing Three and a Half’, as they defend their beloved class teacher, Ms Daffodil, from the plots of Mr Knarz, the Physics teacher, and the children in his class who are without exception both stupid and mean. Every page brings on new hilarity and crackpot schemes as The Three and a Half set in motion a series of daring plans, each more outrageous and ill-considered than the previous, including the spray-painting of the class hamster and a brave attempt to climb the ropes of the gymnasium dressed in a giraffe costume.

This fast-paced and utterly original novel will delight younger readers with its highly visual portrayal of fantastical villains and a gang of heroic outcasts.

Frank Schmeißer was born in 1968 in Hilden in North Rhine-Westphalia. After successfully completing his training as a bookseller, he worked for a year in a bookshop in Rome. He currently lives in Cologne and writes scripts for a variety of television programmes. Schurken überall! is his first children’s book.

Ravensburger Buchverlag was founded in 1883 by Otto Maier. He was impressed by the new educational ideas of his time and tried to implement them in his books and games. His aim to produce only the best is still the dictum of the firm, which survived the two World Wars and has grown into an international company. It is considered one of Germany’s leading publishing houses and this year celebrates its 125th anniversary.